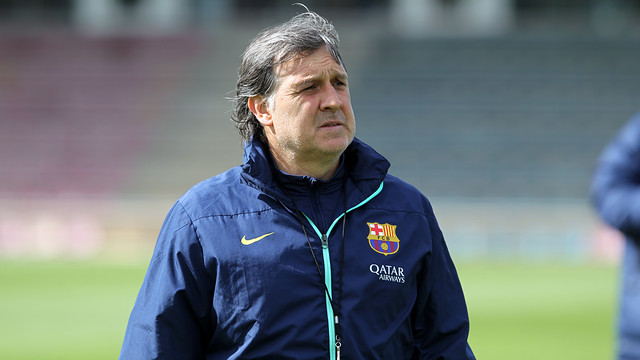 Gerardo Martino is only thinking about Betis. The Champions League tie with Atletico Madrid is forgotten about, at least until Sunday. “Our whole focus is on Betis. It is the most important game and one that could allow us to stay alive in La Liga”, the coach stated

He doesn’t trust the situation that Betis are in, as the bottom club in La Liga. In fact, this is what might make them even more dangerous, “We can’t take Betis lightly. They have great players who play with heart and courage, and will fight until the last minute. We have to understand that they are suffering and that they’ll try to recover against us”. [[CITA_1]]. For the Coach there are no excuses, not against Betis or any of the remaining games until the end of the season. “There is no possible or valid excuse, neither injuries nor problems outside of the football. If we win we’ll have had a good season and if we don’t win we won’t have had a good season. We are the first people who don’t want excuses and we accept the situation as it is” he said

About Pique he recognised that you could never “foresee a situation like a cracked pelvis,” but is happy to have reinforcements of a “great level in the squad”. In this regard, he repeated that “I’m not really in favor of experiments” at the heart of the defense, two positions that seem to be assured if Puyol doesn’t recover. “At the moment we’ve called up Puyol, but we won’t know until Saturday if he can play or not” he added. [[CITA_2]] Martino also referred to the sanction imposed by FIFA. “We’ll leave the people responsible for resolving the matter to sort it out. There is a lot to do and a lot to say still. We are assuming something that may not even happen”, he said, regarding the possibility that they won’t be able to sign any players until June 2015

We have to understand that they are suffering and that they’ll try to recover against us
There is no possible or valid excuse, neither injuries nor problems outside of the football