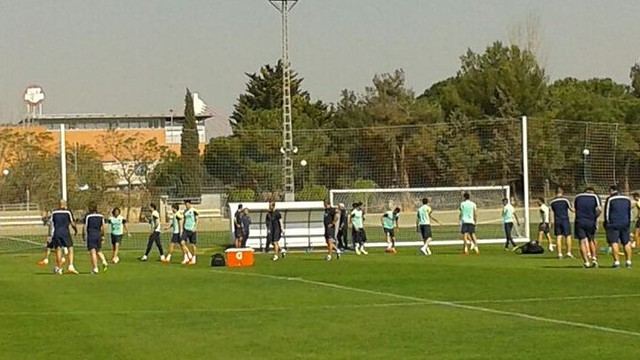 Tata Martino held a gentle training session at the Valencia training ground, where Piqué worked out in isolation

This morning, Barça trained for the last time before the Spanish Cup Final against Real Madrid at Mestalla. The squad arrived in Valencia on Tuesday evening and left their hotel on Wednesday morning for a gentle training session at the Valencia training ground in Paterna. The full squad was there apart from Gerard Piqué and Jonathan dos Santos, with the former doing specific work in the hotel and the latter working on recovery from his injury.

In Paterna, Cesc Fàbregas met Senderos, who he played with at Arsenal and is now at Valencia. The training session was also attended by former Barça player Rufete, the current director of sport at Valencia, who had a long chat with Andoni Zubizarreta and Paco Seirul·lo.

And there was a further visitor on Tuesday in the form of Seydou Keita, who recently signed for Valencia, and popped by the hotel to say hello to his former Barça colleagues.