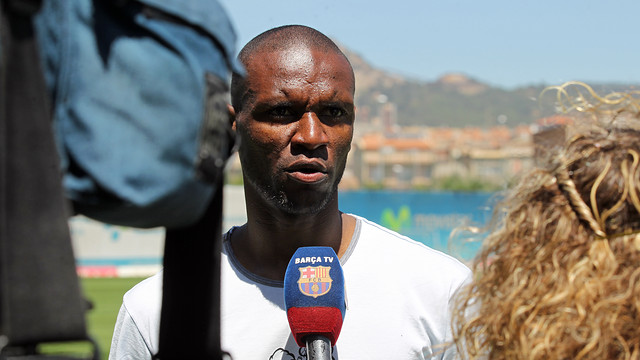 “We both had a tough struggle and we spoke a lot”

Three days after the death of Tito Vilanova, who worked with him at the Club between 2008 and 2013, Éric Abidal joined his ex-teammates in training and speaking to Barça TV explained: “I had to be here, this is an important day. We loved him a lot, him and his family”.[[CITA_1]] A clearly moved Abidal went on: “FC Barcelona is a big family. We have shared many things over many years and if we lose one of our own then it’s normal that it affects a lot of people. I really had to be here”

Asked to remember a special moment he’d shared with Tito, Abidal explained: “I remember that not long ago, he sent me a photo of when we had won a title and the two of us posed holding up the cup. Both of us had to face a tough fight and we shared many things. We spoke a lot. For me it was more important than ever to be her close to his family and the Barça family as a whole”.[[CITA_2]] Abidal also  praised the team for going out and winning on Sunday: “you could tell that mentally they weren’t really up for it and they were clearly affected, but they got a result and took the three points”.

Éric Abidal joined AS Mònaco last summer. Monaco are currently seventh in the French League and don’t play again until May 7.

For me it was more important than ever to be her close to his family and the Barça family as a whole
You could tell that mentally the players were clearly affected, but they got a result.