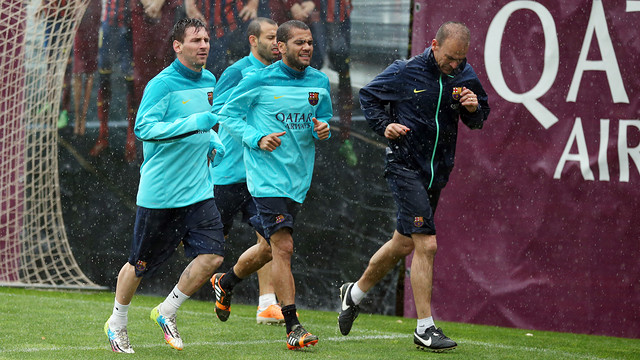 Alex Song, who missed the game at Cornellà-El Prat, was able to train normally

Pedro Rodríguez, with gastroenteritis, was absent

The first team got back to work on Sunday morning, with the players that started against Espanyol doing the usual recovery routine, while the session was considerably more intense for the other players. Alex Song, who missed Saturday’s game with a calf injury, was able to train normally on what was a very wet morning at the Ciutat Esportiva.

The first team members were joined by Barça B goalkeeper Adrián Ortolà, but Pedro Rodríguez, who has gone down with gastroenteritis, was missing.

The squad will meet for further training on Monday at 11.00 AM CET, the penultimate session before the Champions League quarter final first leg against Atlético Madrid (Tuesday 1 at 8.45 PM CET).