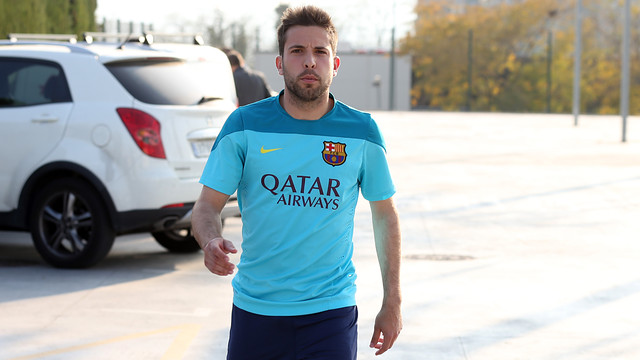 “Avoiding Real Madrid’s counterattacks” is crucial according to the Catalan

Jordi Alba is only focused on winning this Sunday at the Santiago Bernabéu. The FC Barcelona left back reiterated Barça’s need to win multiple times during this afternoon’s press conference. “It’s vital to win away to Madrid. We have to win in order to keep our title hopes alive,” he declared.
[[CITA_1]]
“We’re going to Madrid with the intention of winning the game. We know it will be difficult, but we want to play a good game and win,” he added. For the left back, “there are no favourites” in the Clásico.

Jordi Alba went on to explain that it will be important for Barça “to avoid giving Real Madrid the option to counterattack”. “We will have to be very alert on defence because they are very dangerous on the counter,” he said.
[[CITA_2]]
Barça’s No.18 was asked about Messi and Cristiano Ronaldo: “They are two of the best players in the world. I’ve always said that I prefer Messi, but we have to be honest and recognize that Cristiano Ronaldo is a beast and a very important player for Madrid.”

Looking past the Clásico, Jordi Alba talked about the upcoming Champions League quarter-final draw scheduled for this Friday: “Nobody wanted Manchester City in the knock-out round and we got them. We’ll try to beat whoever we get.”

We know it will be difficult, but we want to play a good game and win
Messi and Ronaldo two of the best players in the world. I’ve always said that I prefer Messi