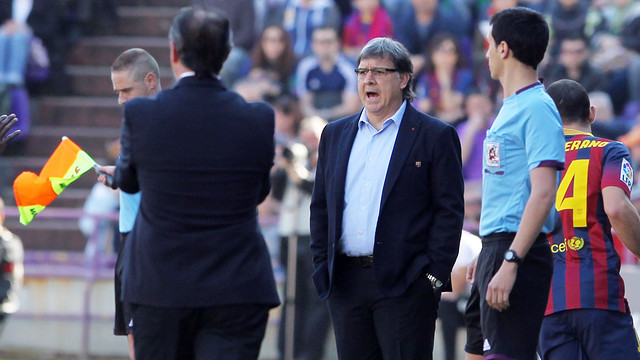 Zubizarreta: “We have to reflect and learn from this”

Director of football Andoni Zubizarreta talked about Barça’s defeat to Valladolid after this Saturday’s match: “This is a defeat we have to take in. We must reflect and learn from it because on Wednesday we have a very important game.” He went on to say that the game “was too dense. They beat us in every part of the pitch. In the second half, when we went for the win, we were unlucky.”

“The team lacked ideas but not intensity. We completely failed in generating play and that’s what stopped us from getting the result,” explained Tata Martino after this afternoon’s defeat away to Valladolid. The FC Barcelona manager added: “We lacked what makes us Barça: good elaboration in our build-up, finding spaces, breaking through on the wings and having depth. But we didn’t lack attitude.”

Martino admitted that Barça’s domination in possession didn’t translate into goalscoring chances. “We had very few chances of actually running at goal. We almost always had to fight against 10 defenders. A good solution would have been creating more space,” said the manager.

Fight until the end

Despite this Saturday’s defeat, Tata Martino was clear that the team will continue to fight until the end of the season for the league title: “Our obligation is to fight for La Liga until the last moment and that’s what we’re going to do. We had to win at the Bernabéu regardless. Currently we aren’t at our best and we have to find our best form in order to play against teams like Real Madrid. We have 15 days to do it.”

Lastly, when asked about this Wednesday’s Champions League showdown at the Camp Nou against Manchester City, Martino said, “we played a good game in Manchester and we played poorly in San Sebastián. We will try to make sure it goes the other way this time.”