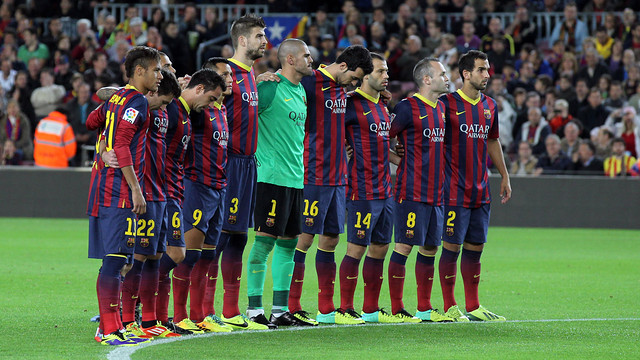 There is a lot to look forward to in this afternoon’s derby between Espanyol and Barça, but it will all be happening without the visiting side’s first choice goalkeeper. Víctor Valdés was seriously injured against Celta at the weekend and will miss the rest of the season, as well as this summer’s World Cup in Brazil. If they manage to get a win at Cornellà-El Prat, then there is no question who the Barça players will be dedicating the three points to – their goalkeeper, FC Barcelona’s number one.

Barça will be hoping to build on a run of three wins that has put them right back in contention for a league title that had looked in danger of slipping away. They are no longer depending on other results going their way, and find themselves just one point adrift of leaders Atlético Madrid, who face a difficult trip to Bilbao later on this evening, and two ahead of Real Madrid, who are home to local rivals Rayo Vallecano immediately after. Thanks to the spectacular win at the Bernabéu last weekend, Barça are back on course for the treble.

All eyes will be on replacement goalkeeper José Manuel Pinto, who has always managed to deliver when called upon and has proved his worth as the regular first choice stopper for cup matches. Xavi returns after being rested midweek, but in addition to Valdés, there are also no places for any of Song, Montoya, Afellay, Puyol, Dos Santos or Cuenca.

Espanyol have spent most of the season mid-table, and after only losing one of their last five matches and on the back of an impressive win away to Malaga midweek, find themselves on 40 points, just two short of the 42 that is traditionally considered enough to ensure first division survival. The more optimistic among their supporters believe they still have a chance of making it into Europe next season, but there is still a considerable margin between them and the teams above them in the table. Midfielder David López is the main doubt for manager Javier Aguirre this afternoon at Cornellà, where the ‘parakeets’ have yet to taste victory against their city neighbours.