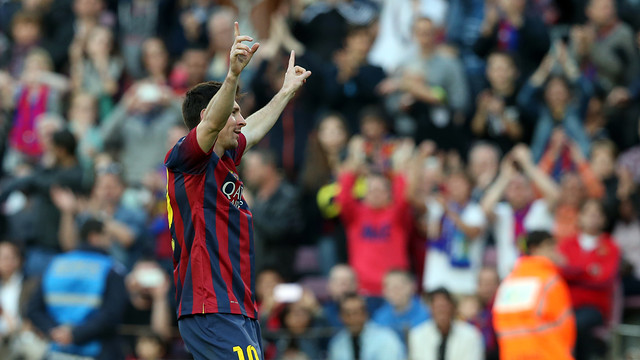 Leo Messi is coming into this weekend’s clash with Real Madrid in tip top form. This Sunday, he overtook Paulino Alcántaraas the Club’s all time leading scorer with 371 goals and at just 26 there’s plenty more to come, as he moves into top gear at just the right time – having scored in eight of the team’s last nine games.

Since the game against Seville on February 9, Messi has bagged 12 goals in all , following up his brace at the Sanchez Pijuan with goals against  Real Sociedad in the Cup,  Rayo Vallecano (2), Manchester City, Real Sociedad, Almeria and the hat trick on Sunday against Osasuna, after missing out in the game against Valladolid.

Those three against the Basques mean that Messi is the team’s leading league scorer, with 198 goals – one more than Alexis.

Hugo Sánchez in his sights

At the Santiago Bernabéu, Leo Messi can close in on yet another record – he’s currently on 233 league goals, one less than Hugo Sanchez and 18 behind the record holder Telmo Zarra with 251.