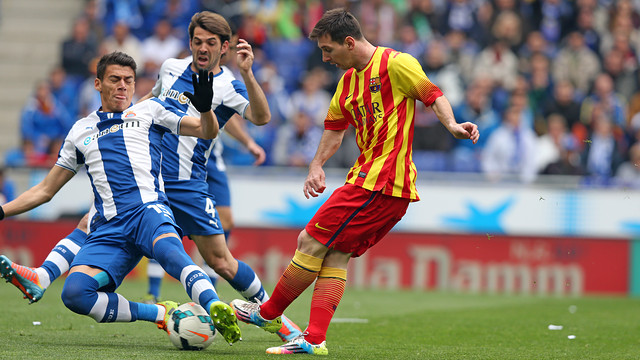 Barça took three vital points from an intense derby at the Cornella- El Prat stadium  thanks to a second half penalty from Leo Messi. It was a typically tense and physical derby game  – made even more difficult by the strong wind at the ground throughout the game.

Both Messi and Neymar blew chances to give Barça an early lead and after those early wobbles, Espanyol tightened up and it took a Messi penalty after Javi Lopez handled in the box to put the visitors ahead late on. Once Espanyol keeper Kiko Casilla had been sent off soon after, Martino’s men were able to hold on to their lead and take the points.

Barça tried to play their usual game from the off, despite the swirling wind which hardly helped their style of play  – and neither did Espanyol’s all action pressing across the pitch, which all too often slipped over into niggling fouls.

Barça were still able to get close three times in the first 20 minutes, though Neymar and Messi failed to take their chances and Espanyol were able to show their danger on the break, with Pizzi firing over the bar from a good position. Barça’s  injured keeper Victor Valdes received a great message of support from the team before the game, but  the hosts were really not testing Pinto in for his first game after Valdes’ injury.

Mascherano, Alba and Neymar were all on the wrong end of some crunching tackles towards the end of the half and although Espanyol forced a series of corners, the players went in at 0-0 at the break.

Both teams seemed to come out a little more cautiously in the second half and with Barça again facing a solid defensive wall and Espanyol concentrating more on conceding than on taking the lead, there were few clear chances.

However, as the game went on Espanyol began to tire and Barça began to see a way through to Casilla’s goal and only the bar kept out Piqué, who latched onto a Busquets back header from a Xavi corner.

Finally, it took a handball in the box by Javi Lopez, as he struggled to deal with Neymar to give Barça the chance they needed. Leo Messi made no mistake from the spot, showing the same cool composure he did last week at the Santiago Bernabéu.

Martino brought on Iniesta after the goal and almost the first thing he did was to put Messi through on Casilla. The Espanyol keeper came rushing out of his box and saved, which drew a red card from the ref. With all the changes already made, it was defender Javi López who had to pull on the keeper’s gloves, but the makeshift stopper made two good saves from Añexis to deny Barça any further goals.