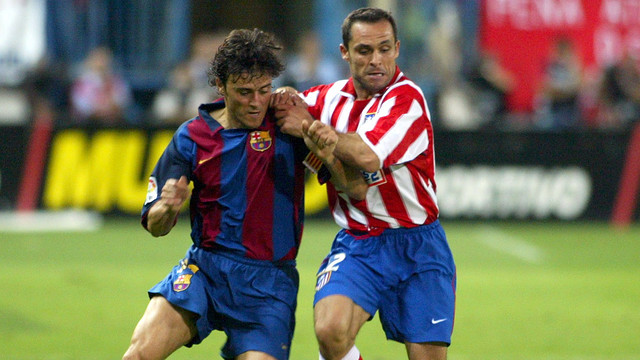 Now manager of Celta Vigo, Wednesday night will be his first ever experience of the Camp Nou through the eyes of the visiting team

Wednesday’s game between FC Barcelona and Celta Vigo (8.00 PM CET) will be a very special night for visiting manager Luis Enrique. The game marks his first return to a club where he was hugely popular player for eight seasons, and where he also spent three seasons as manager of the reserve team.

After starting out as a professional with his hometown club, Sporting Gijón, the attacking midfielder was snapped up by Real Madrid in 1991, where he played for five seasons until, following the breakdown of contractual negotiations with the all-whites in the summer of 1996, he ended up making the surprise decision to move to their biggest rivals, FC Barcelona.

The Barça fans rapidly adopted the charismatic and extraordinarily versatile Asturian as one of their own, and in eight seasons in Catalonia, he became firmly established as one of the club’s most iconic players. First under Bobby Robson, and later Luis Van Gaal and Frank Rijkaard, he was always an automatic first team choice, scoring 123 goals in his 354 appearances and taking over from Sergi Barjuan as captain in 2002.  His major honours at FC Barcelona included two Spanish Ligas, two Spanish Cups and the European Cup Winners Cup in 1997.

He was given a standing ovation after his last ever appearance as a pro, against Racing Santander in May 2004, after which this incredible athlete dedicated his attentions to surfing, marathon running and the triathlon before returning to FC Barcelona in 2008, this time to manage the B team, a position he inherited from Pep Guardiola. Comparisons were immediately made with his former team-mate, with Luis Enrique revealing a similar talent for transmitting the famous FCB system to his players.

From Rome to Galicia

Keen to test his managerial skills at the highest level, Luis Enrique was tempted away by an offer from AS Roma in 2011, before returning to Spain at the start of the current season to manage Celta Vigo. And so it is that Wednesday marks his return, this time with the visiting team, to the club to which he has dedicated so many happy years of his life.

After narrowly escaping relegation last season, under the former FCB man, Celta are sitting fairly comfortably in 12th place in La Liga. Curiously, his team is the only one in the championship that has picked up more points on the road than at home (18 as opposed to 15), including impressive wins away to the likes of Sevilla, Villarreal and Levante. It would be an amazing achievement to repeat such heroics at the Camp Nou, but in Luis Enrique, a man who knows FC Barcelona inside-out, Celta couldn’t ask for a better man to have in charge.