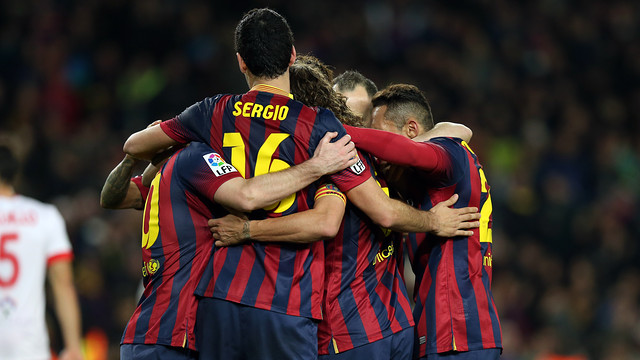 FC Barcelona leads the standings of teams scoring most goals in the major European Leagues, with a total of 74. Here we show, via 5 stats, these and other details from the Continents top scoring team.

1) LEADERS IN EUROPE. With 74 goals FC Barcelona lead the ranking.  Real Madrid and Liverpool come next with 73, whilst Bayern Munich (66),  París Saint-Germain (64) and Juventus (62) top te rankings in other major European Leagues.

3) THREE PLAYERS WITH MORE THAN 10 GOALS. Alexis Sánchez (16 goals), Leo Messi (15) and Pedro Rodríguez (13) are the three players with over 10 goals in La Liga. The list goes up to five players, including Cesc and Neymar Jr, if we include all competitions.

5) 45 GOALS IN 2014. FC Barcelona is the team which have scored most goals in Europe at the beginning of this year. They have scored 45 goals in 16 games, which is greater than the 42 goals scored by Real Madrid, Bayern Munich’s 41, the 38 scored by City and the 34 by Liverpool. In the case of the last 3 teams it has to be said that they have played less games than Barça and Madrid.