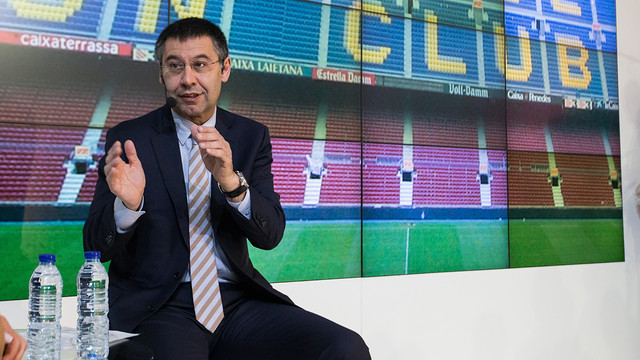 Speaking to Catalan TV, The President praised Puyol’s “impressive” time at the Club.

“He has been a reference point for his maturity, honesty, sacrifice and ambition”.

Josep Maria Bartomeu admitted on Tuesday night in an interview with TV3 that the announcement of Carles Puyol’s goodbye at the end of the season was sad news : “I’m sad because Puyol means a lot to us. He’s unique- an example of a really committed player ” [ [ CITA_1 ] ] However, the President admitted he was also: “ happy for the career he has had and the tremendous things he achieved”. Puyol has so far won a total of 21 titles with the Club

The President explained how he had first  learned of Puyol’s decision : “it was a week ago that he told us he was leaving . He will always have a place here though, he  has so much to contribute to young people . He is an example of maturity, honesty , sacrifice and ambition. If this was America, his number would be withdrawn and his shirt would be on show in the highest place in the Camp Nou .” [ [ CITA_2 ] ] As to a possible future replacement, Sr Bartomeu made it clear: “there aren’t centre halves of his quality, but we are looking”, adding that the Club was planning on two signings “ a keeper and a central defender” to cover the losses of Valdés and Puyol at the end of the season.

I’m sad because Puyol means a lot to us
He will always have a place here though, he has so much to contribute to young people .