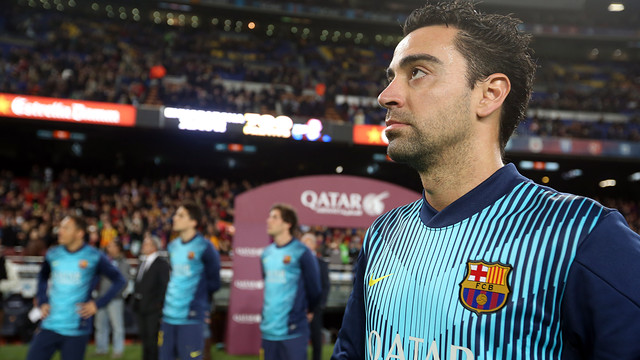 The midfielder insisted in an interview with FIFA.COM that his idea is to retire at Barça, even though “I know how demanding it is”

Xavi Hernández gave his analysis of Barça 2013/24 in an interview with FIFA.COM, as well as talking about his past, and his future, with the Club. Xavi, who has played 16 seasons in the first team, and over 700 matches in a Barça shirt, has been able to play with some of the most important players in the world of football. Ronaldinho, Messi, Ibrahimovic, Iniesta, Neymar…, are some of the players he’s shared a dressing room with, but if he had to pick one out, Xavi has no doubt: “The greatest player ever is Messi. He’s the best of the lot”.

Comparisons are never nice, and Xavi accepts that, when the team are being criticised for their performance and being compared to Barça of previous seasons. “More than Guardiola’s time, and he did a great job as coach, as well as the team, who were also fantastic in terms of results and the style of football played, it’s the legacy that we left”. “We reached the heights in all aspects: football, tactics, technical and physical abilities. We played at a really high level and it’s normal I suppose that there will be comparisons made”, he said.[[CITA_1]]

Howeer, Xavi wanted to emphasise the personality of Tata Martino in his quest to lead Barça to sporting success. “He’s someone with experience and personality. We have great respect for him and he’s showing that he is well capable of coaching Barça”. He added that the current team will fight to win in all competitions: “We can still achieve great things both in the League and in Europe”. [[CITA_2]]

With regard to his future Xavi would like to hang up his boots at FC Barcelona.  “I would like to retire at Barça and to be linked for many years to what I believe is the best team in the World”. Xavi knows  “it’s demanding” at Barça, and knows that the possibility of retiring at the Club will depend on him “playing at the top level”. “I am really enjoying myself, both with Barça and the National Team. It’s my passion, what I love to do: play football. From here on I’ll listen to my body, and see how far it takes me”.

Xavi also talked about his tandem with Iniesta and trophies he has won, with Barça and the National Team, in the last few years. “A few years ago they said we couldn’t play together. Compliments are alway nice, and more so after what we’ve experienced. Before, we won nothing and now we’re winning things, as a team and as individuals, enjoying a wonderful era, and I hope it continues for a few more years”.

We reached the heights in all aspects. We played at a really high level and it’s normal I suppose that there will be comparisons made
I would like to retire at Barça and to be linked for many years to what I believe is the best team in the World