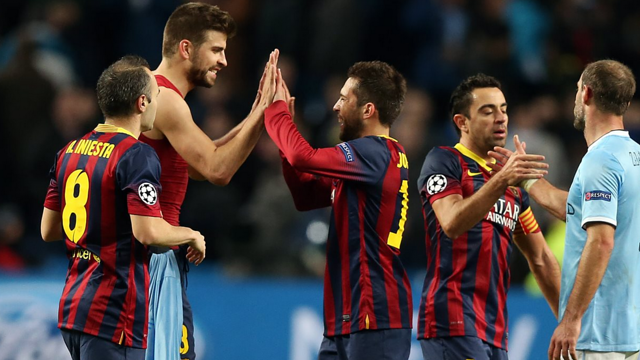 Barça being faithful to their style of possesion football, Messi’s goal, and the sending off of Demichelis were the keys to Barcelona’s win at the Etihad.

According to the Catalan media, Barça have one foot already in the quarter-finals of the Champions League, after their 2-0 win at the Etihad Stadium. Faith in the Barça style of play, the Demichelis sending off and Messi’s calmly taken penalty, as well as Alves’ last minute goal were the keys to the outstanding win. Here are some of the main references:

El Mundo Deportivo: “Barça have a foot in the quarters after winning in Manchester”

In its match analysis, El Mundo Deportivo highlighted the Barça style of possesion football as the key to the victory, which didn’t come without a few scares, but which were solidly dealt with by Valdes, Pique and Mascherano. The daily also outlined Pelligrini’s conservative tactics, playing two full-backs, Kolarov and Clichy, on the left, and Yaya Touré as a defensive pivot. Messi was as decisive as ever, provoking Demichelis’ red card before calmly slotting home the resultant penalty.

Sport: “Messi destroys City with his goal and getting Demischelis sent off”

Sport emphasised the fact that Leo Messi silenced the City crowd, as ever by “making the difference in the most important matches”. The Swedish referee ignored a clear penalty for handball by Clichy in the first half, but was right on the mark when he sent off Demichelis for bringing down Messi in the box. Messi scored his seventh goal in five Champions League matches, and now has 66 in the competition, just five short of the record held by Raul Gonzalez.

La Vanguardia: “Barça, faithful to their style of play, defeat City and almost certify their place in the quarters”

Tata Martino held faith with Barça’s style of play, and won the key battle against Pelligrini, who was more defensvie than usual. Silva and Negredo were the main threats, but Valdes was fundamental when his team needed him. The Iniesta and Messi connection did the damage when Andres found Leo, and Demichelis brought him down on the edge of the area, leading to the penalty and red card. But Pelligrini was most unhappy Swedish referee Eriksson, who he claimed “was not impartial, and decided the game”.

El Periodico: “Barça overcome City with a penalty from Messi, and a late goal by Alves”

In the end, Messi and Iniesta did the damage, and Alves rounded it off  with his late goal. Barça dominated the match, but rarely troubled Hart in the City goal in the first half. Valdes came to the rescue from a dangerous lateral free-kick, but the penalty, scored by Messi, left Barça in control against 10 men.

Messi destroys City, with his goal and getting Demichelis sent off