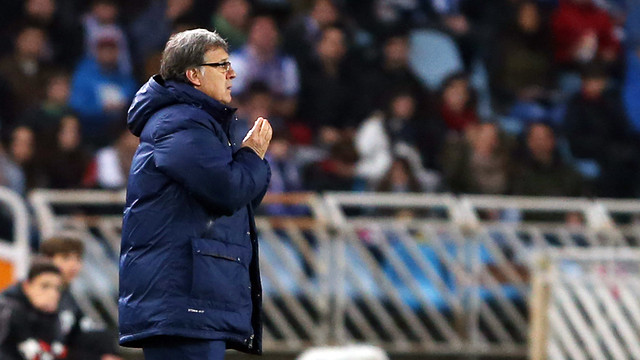 “I didn’t read the game correctly,” says the Argentinian manager

In the press conference after FC Barcelona’s 3-1 defeat to Real Sociedad, Gerardo Martino said that his team need “to look forward” and that his approach to the match perhaps wasn’t the best: “I didn’t read the game correctly.”

The manager explained that “having three forwards implies that we wouldn’t be playing with four midfielders. I thought that it was better to line up a double pivot, with Song.” He added: “rotations are good when the results are positive.” When asked about his substitutions after Real had scored their third goal, the manager said that “we didn’t have the necessity to rethink our approach and when we decided to make our first sub, they scored the 3-1.”

Lastly, Martino, who was sent off at the break, said “I have nothing to say with respect to my expulsion, the referee made the decision.”