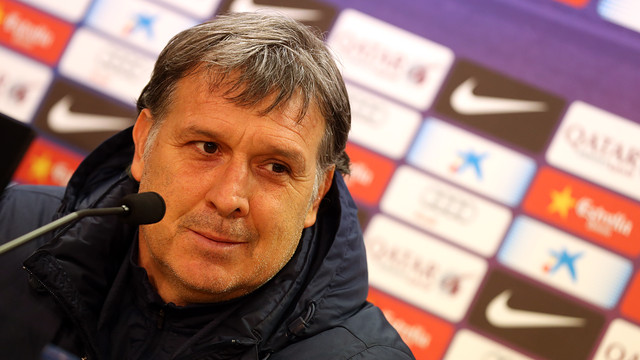 “We can’t allow them to be protagonists,” says the FC Barcelona manager ahead of tomorrow’s Cup tie against Real Sociedad

Gerardo Martino is one step away from coaching FC Barcelona into the final of the Copa del Rey. With the 2-0 from the first leg, the Blaugrana visit Real Sociedad on Wednesday. Martino will make the trip with all 25 of his first team players seeing that “we are only 90 minutes from qualifying for one of the three finals of the season and I think it’s a good idea that all of us be there. It’s very important to secure a place in the final of the Copa del Rey.”
[[CITA_1]]
The FC Barcelona manager is approaching this match “as if the first leg ended in a 0-0.” He added: “it’s a decisive game. It would be a bad idea to give our rival a chance to get back into the tie.” Martino believes that it’s fundamental to “have control – we can’t allow the match to turn into a back and fourth affair. We need to own the match, not let our rivals be protagonists.” In addition, he expects Real Sociedad to not be as defensive seeing that “they will try to fight back” from the two-goal deficit.
[[CITA_2]]
“Every team can improve,” said Martino. “I want the team to be consistent throughout the 90 minutes of play.”

Neymar Jr, who has yet to receive the medical green light to return to competitive play, will watch the second leg of the semi-final tie from the stands in Anoeta. Martino doesn’t want to run any risks with the Brazilian as he noted that Neymar will only return to the team when he’s 100 percent fit. “He completed his second session with the team, he’s doing a good job and he’s not in pain. Physically he’s doing well,” concluded the manager.