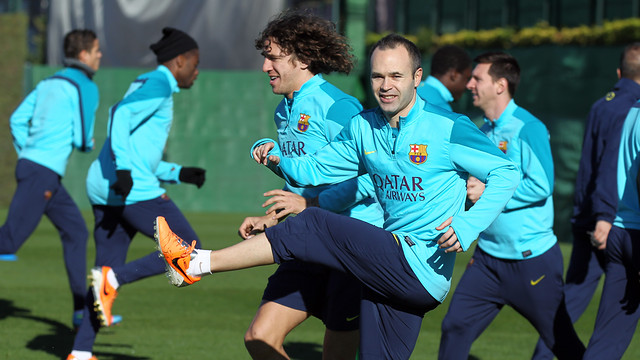 Neymar Jr, Dos Santos and Oier are the only players missing

Tata Martino has named a 22-man squad for Wednesday’s Cup semi-final first leg against Real Sociedad, with Puyol, Montoya, Afellay and  Cuenca returning and only the injured  Neymar Jr, Dos Santos and Oier Olazábal missing out

Neymar continues with his recovery

Neymar Jr continues to work on his recovery and today he was exercising apart from the rest of the squad in training at the Ciutat Esportiva, whilst Oier Olazábal was also absent with a stomach bug. The squad will be back for a final session before tomorrow’s game at noon tomorrow on the Camp Nou pitch, before spending the build up to the match at the team hotel.