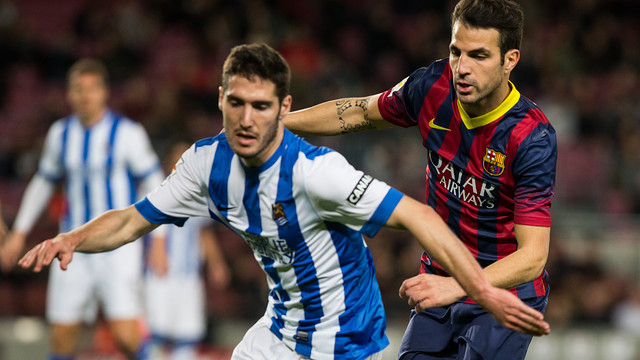 FC Barcelona are 90 minutes away from another final. It would be their fourth Cup final in six years, and the team’s 15th final in all competitions. To feature in it, however, they have to defend their 2-0 result from the first leg of the semi-final tie at the Camp Nou against Real Sociedad.

There’s reason to wary ahead of tomorrow’s match seeing that luck hasn’t always been on Barça’s side in the Copa del Rey. For example, Getafe overturned a 5-2 result seven years ago and Mallorca nearly came back from a two-goal deficit in 2009.

Everyone named to team

The entire first team travelled to San Sebastián. The match, the most important so far in Martino’s Barça career, might see Carles Puyol feature in the starting team. The captain and Oier, both of whom were given the green light to return to competitive play, are the biggest additions to the Argentinian’s team. It’s also worth noting that Barça don’t have any players in danger of missing a hypothetical final due to suspension.

Looking for a comeback in San Sebastián

The Anoeta faithful are optimistic ahead of Barça’s visit. The Basque team are confident they can come back from the two-goal deficit and reach their first Cup final in 26 years. “We will leave it all out on the pitch in order to have a historic night” said manager Jagoba Arrasate in his pre-match press conference. On the line, of course, is a coveted spot in the final against Real Madrid – Los Blancos eliminated Atlético Madrid in the other semi-final on Tuesday evening.