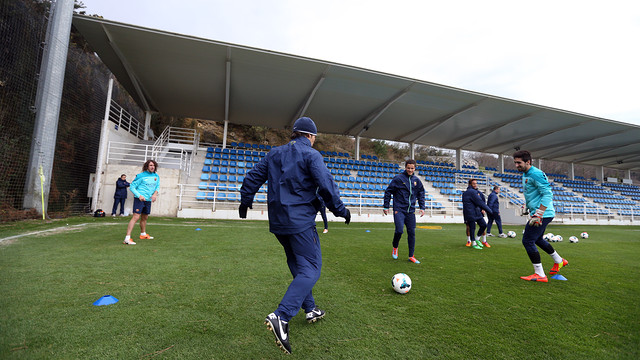 Neymar, Puyol, Montoya, Afellay and Oier trained at Real Sociedad’s training facilities this afternoon while Dos Santos and Cuenca trained in the gym at the team hotel

Barça are close to qualifying for the Copa del Rey final. That’s why manager Tata Martino brought all of his players to San Sebastián. Before this evening’s match five players trained at Real Sociedad’s Ciudad Deportiva. Puyol, Montoya, Afellay, Oier, and Neymar, who doesn’t have medical clearance to play, trained at the installations of Zubieta.

Jonathan dos Santos, who is injured, and Isaac Cuenca trained at gym in the team hotel.

After a flight of nearly an hour, the team’s plane touched down at approximately noon in San Sebastián. Barça will remain in the Basque city until Thursday morning, and upon their return to Barcelona they will head directly to the Ciutat Esportiva, where they will train at 1:00 PM CET.