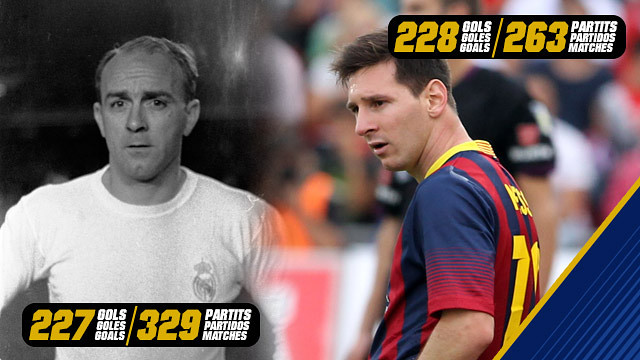 Thanks to his two goals against Rayo this evening, Messi takes his goal tally in the league to 228

The Argentinian is the third highest goalscorer in the history of La Liga, level with Raúl González

Leo Messi’s legend continues to grow. The Argentinian broke Alfredo Di Stéfano goalscoring record in the league and equalled Raúl González’s. Thanks to his goals against Rayo Vallecano, Barça’s No.10 took his league goal tally to 228. It only took the player 263 appearances to set this record, 66 less than his countryman, who played for Madrid (1953/1964) and Espanyol (1964/1966).

In addition to surpassing Di Stéfano, Leo Messi also equalled Raúl González’s goalscoring record in the league. The former Real Madrid player netted 228 goals from 550 appearances (0.41). Now, the Argentinian is the third highest goalscorer in La Liga, only Telmo Zarra (251 goals) and Hugo Sánchez (234) have scored more than Barça’s No.10.

If we include the goals Messi has scored in other competitions, his goal tally ascends to 337. Here’s a breakdown of Messi’s goals: 228 in the league, 65 in the Champions League, 29 in the Cup, 10 in the Spanish Super Cup, 4 in the Club World Cup and 1 in the European Super Cup.