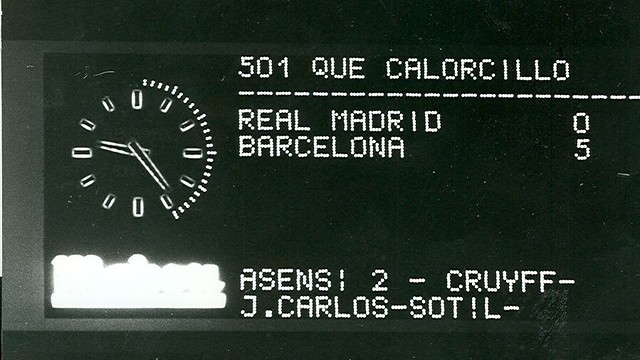 On Monday, February 17, four decades will have passed since that spectacular 0-5 win over Barça’s eternal rival

The match, on the 22th matchday of the season, was won with goals by Asensi (2), Cruyff, Juan Carlos, and Sotil

It was on matchday 22 of the League, when Barça, with Dutch star Johan Cruyff as the key player, were dominating the League, with a seven point advantage over second-placed Atletico Madrid. Real Madrid, despite the addition of German international Gunter Netzer,  were not in great shape, and were in mid-table, 9 points adrift of Barça.

So, Rijkaard’s team were probable favourites in this year’s Classic, but even the most optimistic Barça fan wouldn’t have foreseen what happened next.

Television as a witness

At that time a single television channel, TVE, regularly broadcast a Spanish League game, every Sunday at 20.00. That day, of course, the chosen game was Madrid v Barça. That was how the whole of Spain were able to watch a fabulous demonstration of Barça superiority, giving Real Madrid such a thrashing that one Madrid newspaper, the day after the game, published the headline: “Madrid, a dummy in the hands of Barça”. Goals from Asensi (2), Cruyff, Juan Carlos and Sotil gave Barça a 0-5 win that would never be forgotten.

Joy amidst the tension

As was bound to happen, the streets of Barcelona exploded with joy at such a fabulous win which would be a prelude to the conquest of the League title after fourteen years of drought. Suffice it to say, however, that in those days the football euphoria gave just a little relief from the tense political situation that existed in the whole of Spain.