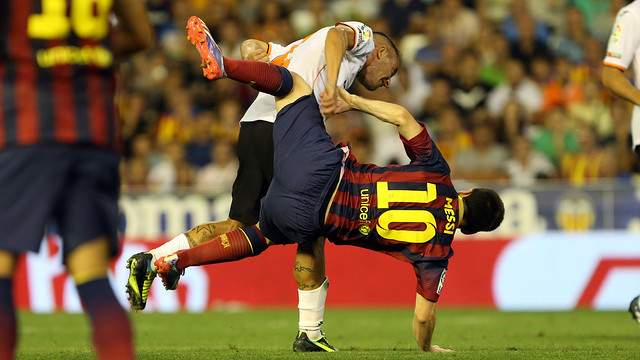 There are likely to be as many as six changes with respect to the team that played against Levante. Valdés, Piqué, Jordi Alba and Messi should all be starting, although it’s Martino who has the final word

There is plenty to look forward to on Saturday afternoon at the Camp Nou (4.00 PM CET, GolT and Canal+ Liga). FC Barcelona entertain Valencia in the first league game of the weekend at a time when the footballing action is really starting to heat up. There are three teams in contention for first place in the league, the cup has reached the semi-final stage, and the return of the Champions League is just two weeks away. February is here, and with it, the most important stage of the season.

There is a buoyant mood at the club. Martino has almost his entire team available, and is free to pick and choose. Alves, Sergio and Xavi all return after being rested for the midweek cup tie, but there are no places for any of Montoya, Puyol, Afellay or Cuenca, in addition to the injured Oier, Dos Santos and Neymar.

There are likely to be as many as six changes with respect to the team that played against Levante. Valdés, Piqué, Jordi Alba and Messi should all be starting, although it’s Martino who has the final word.

The winter transfer window has been a lively time for Valencia. Tenth in the league, all of Guardado, Canales, Pabón and Postiga have left Mestalla, while the newcomers are Rubén Vezo, Vargas, Araujo and former Barça man Keita, although the latter two have both been left out of the squad that’s coming to the Camp Nou.

But Juan Antonio Pizzi will be welcomed back to his former home. The former FCB striker took over as manager of Valencia in late 2013, but has only won one of his first six matches in charge. In the league, his team has drawn twice and lost once, while despite elimination, they looked impressive against Atlético Madrid in the cup. Getting something out of this trip to the Camp Nou would be a huge boost for a team that is slowly taking shape under its new manager.