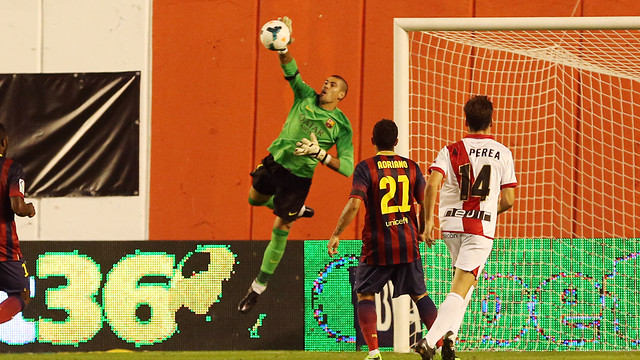 8.00 PM CET, GolT and Canal+ Liga: Barça need to beat Rayo to ensure they stay top of the table

Neymar is back in the side, but Xavi misses out

The decisive stage of the season continues with Barça at home to Rayo Vallecano, just days after ensuring passage to the Spanish Cup Final and with a crunch Champions League fixture against Manchester City to come on Tuesday. But it is not yet time to think about the European campaign, for there is a crucial game in the domestic championship to worry about before.

Tata Martino has picked a provisional squad of 21 players to take on Rayo. Both Puyol and Neymar are back in his plans but Xavi Hernández is left out along with Oier, Dos Santos and Cuenca.

Another of the attractions is Leo Messi. The Argentinian is just one goal short of equalling Di Stéfano (227) and two short of Raúl (228) in the all-time ranking of league goalscorers, and surpassing those two would place him third in the list.

Rayo, meanwhile, are coming to the Camp Nou is troubled times, Although they beat Malaga convincingly last week (4-1), they are still second from bottom in the table and four points adrift of safety. Their manager, Paco Jémez, who is famed for his daring approach and admiration for the passing game, has recovered both Viera and Tito, but has full back Nacho out through suspension. Centre back Gálvez is also still injured, so big changes will be required in the Rayo defence.