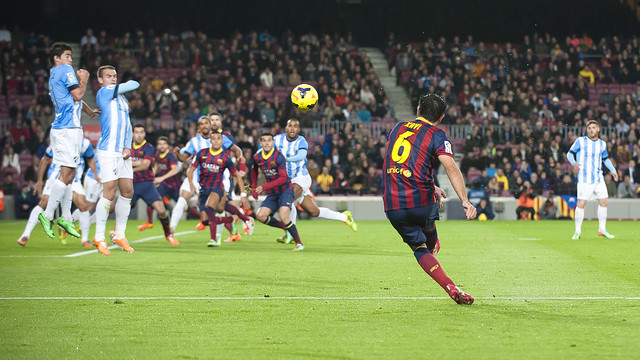 “I’ve been here for many years, there are a lot of memories and we’ve won a lot of titles with this generation of footballers, one look back and you realise that we’ve really enjoyed ourselves,” says Xavi

FC Barcelona midfielder, Xavi Hernández, attracted a lot of attention this evening ahead of the match against Málaga as the Camp Nou honoured him for his recent feat of featuring for the Blaugrana in 700 official matches. After the match, Xavi revealed that it was a very special moment: “I’ve been here for many years, there are a lot of memories and we’ve won a lot of titles with this generation of footballers, one look back and you realise that we’ve really enjoyed ourselves.”

After the 3-0 win against Málaga, Xavi said that he’s pleased with the team’s form: “I think we all saw a great Barça team, we’re on form, we enjoyed ourselves and we feel good.” The Barça midfielder addressed the rumours that he was considering leaving the Club: “I’m not going to Qatar or New York, I want to finish my contract with Barça. I’m staying here, I feel important and useful.”

Xavi also praised the work done by Tata Martino: “Tata is doing an incredible job with the team.” The Catalan then confirmed that it hasn’t been an easy week for the team but that the players remain focused: “It’s been an atypical week. We respect Rosell’s decision and we wish him the best of luck. Starting now, we need to help Bartomeu. Rosell’s resignation doesn’t affect the team. Our objectives haven’t changed, we need to move forward,” he said.

The following are statements made by some of the players:

“We dominated the first half but we only managed to score one goal. In the second, when we scored the second and third goals, we had more control – we’re leaving here with good sensations.”

“We’ve been league leaders for many weeks, and that is important – it means that were a very compact team.”

“Messi always gives us a lot, when he doesn’t score he gives assists.”

“After spending a lot of time on the sidelines, I’m sure it was an unforgettable day for Afellay. Now he’s back in the team.”

“The president issue has not affected the team, we’ll continue to compete at the same level. There’s a lot of discussion about our form, but on the pitch we still compete in the same way. We’re professionals.”

“I don’t know if the decision to resign is the best for Barça. But it was a personal decision and people are more important than the institution.”

“We conceded very few chances, passed the ball well, and we could have won by a much larger margin.”

“Xavi is a legend at the Club, he’s an example to players coming up from the youth system – it’s a pleasure to play and win titles with him.”