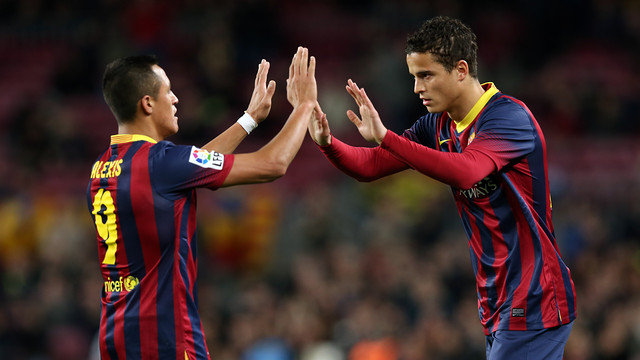 The Dutch player, who played on the right wing when he came on for Alexis, donned the FC Barcelona strip after nearly 20 months recovering from a series of injuries and playing with Schalke 04 on loan

He only played six minutes, but they had to be some of the most joyful ones of his career. Ibrahim Afellay, who has successfully recovered from a series of injuries, donned the Blaugrana kit nearly a year and a half since his last match with Barça, on May 12 2012 (Betis-Barça).

It was the 87th minute when the Dutch player came on for Alexis and the Camp Nou welcomed him with a ruckus standing ovation. During his time on the pitch, Barça’s No19 played on the right wing and he featured in a total of eight plays.

At the end of the match, the majority of the Barça players congratulated Afellay on his return. Andoni Zubizarreta, athletic director of the Club, said, “just as Tata Martino said, he’s a player we want. He can compete and that’s good news.”