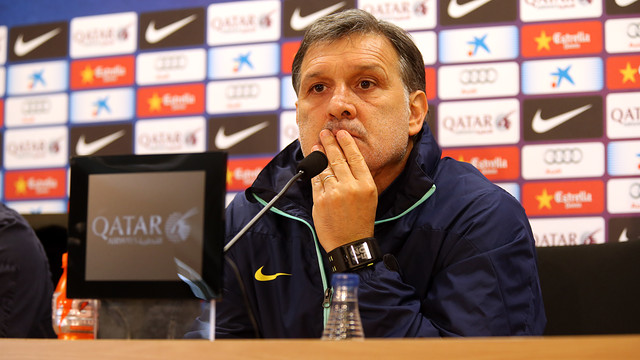 Although Messi won’t be playing against Elche, his manager is impressed with his compatriot’s condition

FC Barcelona’s year starts on Sunday against Elche (16.00, Canal+Liga i GolT), followed by a midweek cup clash with Getafe

There are positive vibes in the Barça camp and “Messi has the eye of an assassin”. That was Tata Martino’s way of describing his star striker’s mood following his return to active duty. “He’s come back in good shape. He’s done well in three training sessions” said the manager, although he has decided not to risk things by including Messi in his first squad of the new year.

Martino went on to comment that “I think I can say that we are fully satisfied with the condition that the players have returned in. There is nothing to suggest that there will be any turn for the worse in our football, it’s as if the players had never been away”.

January will be a tough month. There are midweek cup matches to contend with, as well as the crunch visit to the Calderón to face the most devastatingly strong Atlético Madrid side we have seen for many a year. “In all honesty, each competition is a world to itself” said Martino when asked to evaluate the forthcoming set of fixtures. “We can’t afford to relax in any of them”. But first and foremost is tomorrow’s match with an Elche side that the FCB manager knows merit every respect, for although they may have only just returned to top flight football after a long absence “they’ve been getting some good results, and we could quite feasibly lose a league match against them”.

“Our aim in December was to stay in contention on every front and we did that”, he continued. “Now we need to worry about the league and the Copa del Rey. We can put aside thinking about the Champions League until later.”

He also preferred not to get side-tracked by talk of the game against the Liga co-leaders. “First we have to beat Elche and after that Getafe”, he insisted. “I can’t be thinking about one match when we have two to play before it.”

As for the recent spate of injury concerns, which seems to have come to an end, Martino said “the team responded as we would expect them to respond. We appreciate the way they coped with it all. Let’s just hope that the next five months are kind to us in terms of injuries.”

Afellay is back in action after a particularly long absence, and Martino admitted that he is very much an admirer of the young Dutchman, and has every intention of including him in his future plans. “He is the kind of player we want and we need him to continue to develop”, he said. “We are pleased to have him in the team”.