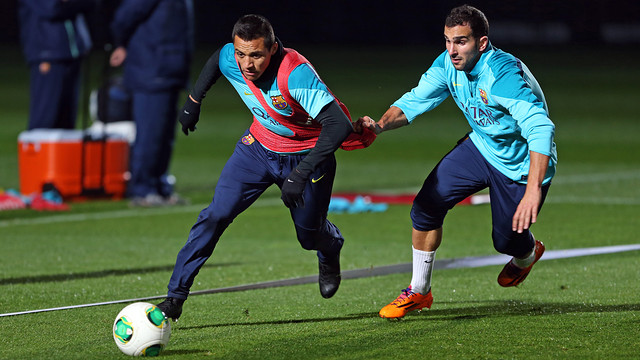 Iniesta, Sergio Busquets and Jordi Alba will not feature in the Copa del Rey tie

Gerardo ‘Tata’ Martino revealed his squad for the second leg of the round of 16 of the Copa del Rey scheduled for this Thursday away to Getafe (10:00 PM CET, TV3 and Antena 3). The Argentinian manager named 18 men to the team – the players not selected for the Cup tie are Sergio Busquets, Jordi Alba, Afellay, Cuenca, Dos Santos, Oier and Iniesta.

The team completed their final session ahead of tomorrow’s Cup tie at the Ciutat Esportiva Joan Gamper this Wednesday. The session started with a warm welcome for Marc Bartra, who turned 23 today and renewed his contract with the Club until 2017.

Gerard Piqué trained with his teammates – he trained apart from the team yesterday – and Juvenil A player, Onana, also trained with the first team.