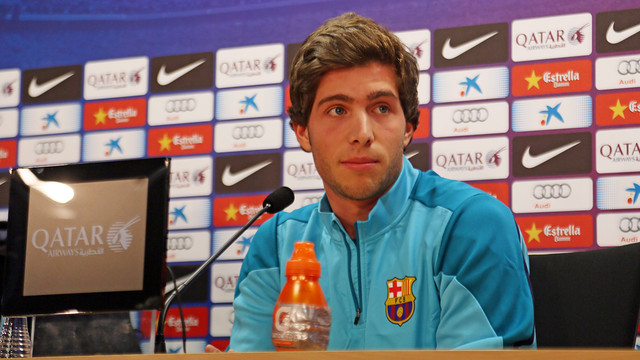 The midfielder has featured in the team’s last 12 matches, and he hopes to “keep on working hard” in order to get more minutes on the pitch

“We can’t lose points if we want to win the league,” he says

At the beginning of the season Tata Martino asked Sergi Roberto to be patient, that eventually he’d get playing time. That time has come: Sergi Roberto has featured in the team’s last 12 matches, both as a starter and as a reserve. “Tata Martino is very important for me. During this time I haven’t given up and I work hard every day. Now I hope to make good on his confidence by playing well and helping the team. I have to continue working hard and earning my playing time both in games and in training sessions.” He was also clear that he has no intention of leaving the Club he joined eight years ago.
[[CITA_1]]
When asked about whether or not he’ll be Xavi’s successor, Sergi Roberto was clear: “He is one of the best players in the world and I’m just starting my career with the first team. There are very few like Xavi. I’d be happy to be just a small part of the player Xavi is.”

The focus of the day, at least in the press, is the Ballon d’Or, and Sergi Roberto was quick to congratulate the winner, Cristiano Ronaldo. He added that all three finalists “deserved the award,” but if he could have voted he would have “voted Leo Messi the best player in the world.” He added: “He’s been one of the best for seven years and he’ll continue to be one of the best.” In addition to the Ballon d’Or, the FIFA FIFPro World XI all star team – Alves, Xavi, Iniesta and Messi were named to the team – was also revealed during the Gala. When asked about Sergio Busquets, who was one of the finalists but wasn’t selected for the team, Sergi Roberto said: “Xavi and Iniesta are on the team, not all of us can be on it.”
[[CITA_2]]
When it comes to the league campaign, the midfielder said that the draw at the Vicente Calderón “was very good because that point will be very important at the end of the season.” In any event, he is sure that the competition will be “very tough,” and he added: “We can’t let a lot of points slip away if we want to win the title. We have to take every game seriously.”

He also talked about the Copa del Rey tie against Getafe on Thursday. Despite the 4-0 from the first leg, the tie “isn’t over” as he noted the league game between the two sides when Getafe took an early 2-0 lead.