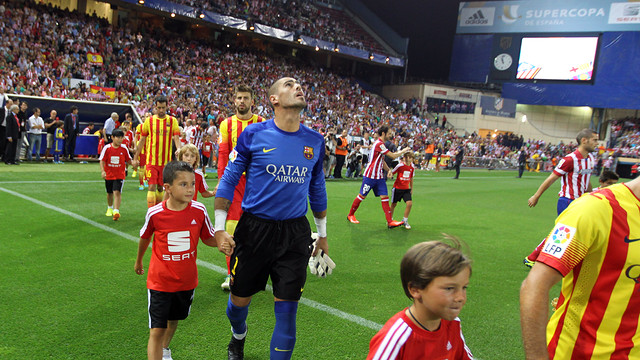 The top two teams in La Liga, with 49 points each, go head to head at the Vicente Calderón

Everyone iwill be there, including top scorers Diego Costa and Messi, the recovered Neymar and the pardoned Juanfran

The big day has arrived. Although this is only the halfway stage of the current league campaign, Saturday’s game (20.00 CET, Canal Plus) could have a huge bearing on the eventual outcome. The Vicente Calderón is the venue, and Atlético Madrid and FC Barcelona are the teams, first and second in the table and both on 49 points. Things just don’t get any closer than that.

Both teams go into the match with all of their main stars available. Leo Messi is back for Barça, fresh from scoring two midweek goals against Getafe, and Neymar has recovered from a bout of gastroenteritis that kept him out of that game. But with all of Cesc, Alexis and Pedro in fine form, it is unclear what kind of attack Tata Martino is going opt to field.

Unbeaten at the Calderón

Diego Simeone probably has less to think about when it comes to picking his starting elven. Atlético Madrid can practically field their strongest possible side now that the Competition Committee has decided to withdraw the yellow card shown to Juanfran in Malaga, which in theory meant he was going to be suspended for this game. Diego Costa, one of the most impressive players in the Spanish championship this season, is ready for action, as is former FC Barcelona man David Villa, who scored against his former team-mates in the preseason Supercup. Only Mario Suárez, who has been out injured for some time, is missing from the home line-up.

Atlético Madrid have won all nine games played in their stadium this season. Barça have won 2-1 on their last three trips to the Calderón, but against one of the finest Atlético teams we have seen for many a year, Saturday night’s visit promises to be the toughest challenge of all.