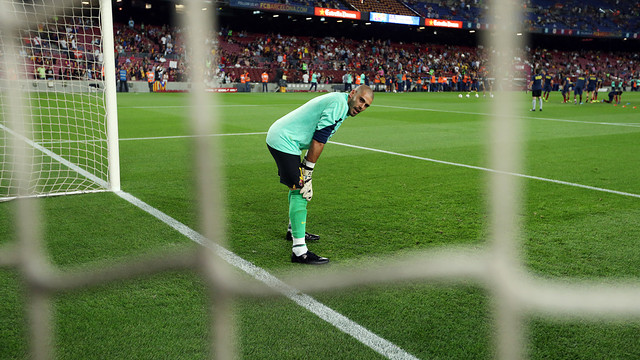 Gerardo Martino’s team, with Valdés, Xavi and Neymar Jr, will take on Elche at the Camp Nou

After 25 years Elche return to the Camp Nou. The league leaders resume their bid to defend their title this Sunday afternoon as they host Elche in the first match of 2014. FC Barcelona are also nearly back to full strength seeing that Víctor Valdés (six weeks on the sidelines), Xavi (missed the match against Getafe) and Neymar Jr (suspended against Getafe) are back for the first match of the year at the Camp Nou.

Therefore, the only players Tata Martino cannot call on for this afternoon’s match are Messi, Alves, Dos Santos, Afellay, Cuenca, and Sergio Busquets, who is suspended. The midfielder could return to the team for the Cup match against Getafe (Wednesday the 8th, 22.00) or for the league match at the Vicente Calderón (Saturday the 11th, at 20.00).

Top spot up for grabs

Can Barça keep their position at the top of the table? That’s the question as the league leaders for the past 55 rounds of competition take on the newly promoted side this Sunday. Atlético Madrid’s victory over Málaga (0-1) forces the Blaugrana to defeat Elche at the Camp Nou. If they do, Barça will travel to Madrid as league leaders thanks to their more favourable goal average.

Elche travel without their starting keeper

Manager Fran Escribá has named 19 players to the squad for the match. Manu del Moral is back in action, after spending two months on the sideline due to injury, while Damián and Coro (suspended) and the team’s starting keeper Manu Herrera (injured) will miss the match.