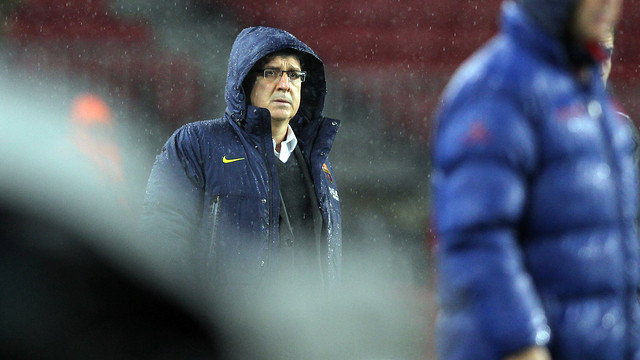 Despite the 1-4 result from the first leg of the Cup tie against Levante, Barça took this evening’s second leg seriously (5-1). Tata Martino, after the match, said, “the first 15 minutes concern me, not just because of the goal, it seemed as though we weren’t intense enough. But the remaining 75 minutes we were intense.”

According to the manager, “our three Cup ties this season have all been similar, it looked as though they were over after the first leg and we played the second leg with respect, intensity and the desire to do a good job.” Martino, just as he’s done in past Cup matches, sent out a very different starting XI to the team he usually sends out for league games. “We gave players minutes on the pitch. All of the players are excited to play,” he said.

He then went on to thank the fans for coming to the Camp Nou: “The 25,000 people that came are brave. I can only thank them because of how bad the weather was and the late kick off time.”

Looking forward, the Barça manger believes his team’s road to the final won’t be easy. “I don’t know what will happen tomorrow, if the game will be played or not, but if in the end our rivals are Real Sociedad, we’re going to have a very tough semi-final.” He added: “We have three matches between us and the title, if we get to the final we have to win it.”