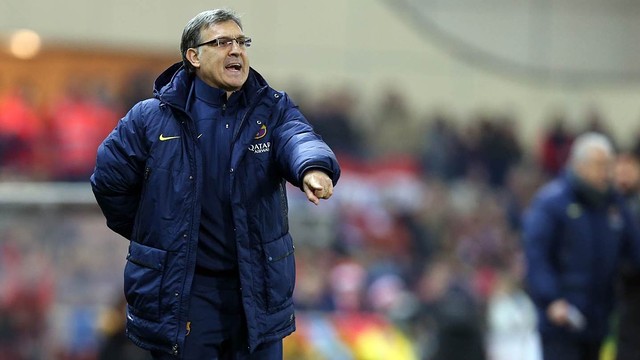 I want to be champions in the summer, not in the winter, but reaching this point in the season with 50 points is good,” says Martino

“It’s a good point if we keep in mind that we played away to a team that have not conceded any points at home up until today,” said Tata Martino after this evening’s match against Atlético Madrid. “We wanted to win the match but we can’t be reproached for getting this result. It’s not a bad thing to close out the first half of the season with 50 points.” He added: “I have the feeling that tonight’s match will make us stronger.”

The FC Barcelona manager admitted that he wasn’t expecting his players to create a lot of chances, but he’s satisfied with their performance nonetheless: “We didn’t concede any counterattacks and our predisposition to recover possession and pressure their key players requires absolute concentration.” He also said that there are a few things that could be improved: “We weren’t as quick with our ball circulation and we weren’t as dynamic. However, in these types of matches you can’t take anything away from your opponent.”

The decision to keep Messi and Neymar on the bench

Martino explained that Messi and Neymar weren’t ready to start the match, and that’s why he opted instead for Pedro and Alexis. On Messi, Martino said, “the other day he played 30 minutes and this Saturday, 45. We wanted him to play less but Iniesta’s injury changed our plans. Atlético Madrid’s defensive set-up is hard to break, even for him.”

Lastly, when asked about Barça’s first half of the season, Martino said: “In footballing terms we improved over time. In terms of points, I want to be champions in the summer, not in the winter, but reaching this point in the season with 50 points is good.”