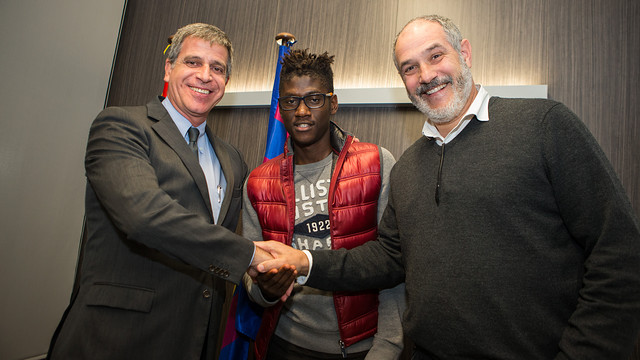 His buyout clause is set at 12 million euros

Macky Frank Bagnack signed his contract extension this afternoon, which will keep him at the Club until June 30 2017. His buyout clause is set at 12 million euros.

The Cameroonian began his career at Barça in 2006, at the age of 13. He made the leap to Barcelona from the Eto’o Foundation, and now he’s part of Eusebio Sacristán’s Barça B team.

The Cameroonian centre back was named to the Barça B team at the beginning of the season, even though he featured for the side last season against Guadalajara. This season, he’s played a total of 14 matches and he’s shown that he can easily operate both as a centre back and as a right back.

Macky made his debut for the first team this season against Lechia Gdansk in Poland. Last year he was part of Barça’s Juvenil A league-winning team.

“I’m very pleased that I’m renewing my contract with the best team in the world. I’m very happy. My favourite moment was my debut in the Joan Gamper Trophy and the Asia Tour with the first team. I will continue improving so that one day I can reach my full potential.”