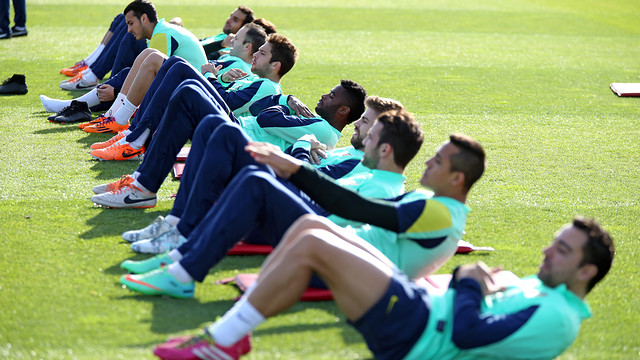 There was training this morning at the Ciutat Esportiva, with the players cocnentrating on recovery from Sunday’s match

There was no time for King’s Day indulgence after beating Elche at the Camp Nou, as the first team now have to immediately start thinking about the cup tie with Getafe on Wednesday (22.00). So, although today is a holiday in Barcelona, for the players it was work as usual at the Ciutat Esportiva, with the players that faced Elche focusing on recovery from the previous day’s exertions.

Leo Messi, who has still not been declared fully fit, was able to train normally. The session was also attended by two players from Barça B, Agostinho Cá and Miguel Bañuz.

On Tuesday at 11.00, the team will train again, behind closed doors at the Ciutat Esportiva, to be followed by a press conference from manager Tata Martino.