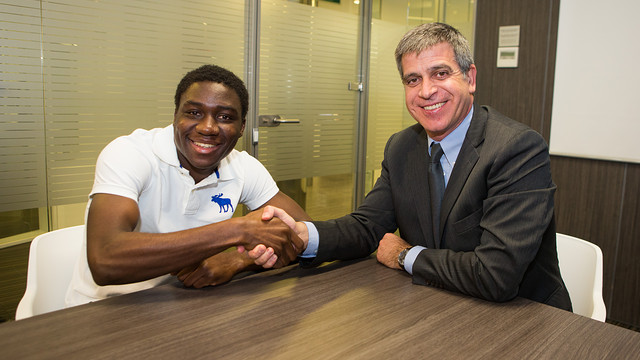 Jean Marie Dongou signed his contract extension with the Club this Tuesday afternoon. He will remain at the Club until June 30 2017 and his buyout clause is set at 12 million euros.

The Cameroonian, just like Bagnack, arrived to La Masia in 2008 at the age of 13 from the Eto’o Foundation. He plays for Eusebio Sacristán’s Barça B.

“My best moment was my debut in the Camp Nou”

Dongou was ecstatic after he signed his new contract: “This is a very important day in my career, I’m very happy. When I came to La Masia and the day I made my debut at the Camp Nou are my two most memorable moments since I came here. I’m very excited to stay at the Club.”

Jean Marie Dongou Tsafack, born 18 years ago in Douala (Cameroon), is a quick and powerful forward. This season he made his debut for the first team and he’s also been called up to the Cameroon national side.

He’s featured 12 times for Barça B this season and he’s scored two goals. He’s been called up to the first team seven times this year (four times in the league, twice in the Champions League and once in the Cup), and he scored his first official goal for the first team on December 6 in the Cup tie against Cartagena (1-4).

Last season was his first with Barça B. The forward played a total of 33 matches and scored five goals.