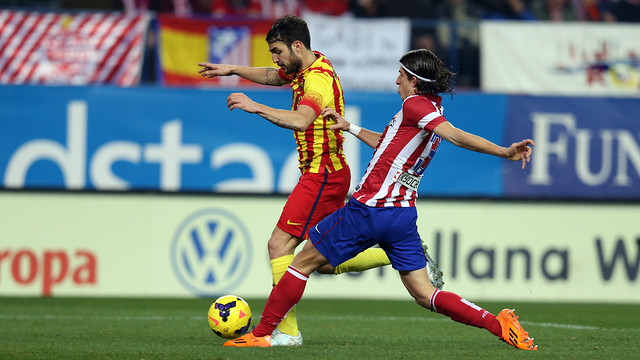 Cesc Fàbregas left the Vicente Calderón pleased with how his team played against Atlético Madrid: “We ended up pinning Atlético Madrid back in their own area, we were a very solid team.” The Catalan also praised the Colchoneros: “We took a step forward today, Atlético are one of the best teams in Europe and they defend really well.”

Cesc went on to highlight how intense the match was despite the fact that it ended in a goalless draw: “We knew that it was going to be a hard match and that in all likelihood it wasn’t going to be a pretty game.” This was Cesc’s fourth consecutive call-up to the starting lineup: “We have a very competitive team regardless of who plays, personally I’m doing well physically and I’m confident.”

“Atlético Madrid are a very compact team, well worked and currently one of the best in Europe.”

“We controlled the match, but we didn’t create a lot of chances. It was a very intense match.”

“We could have scored in the last 15 minutes, but Atlético showed that they are a great team.”

“Messi and Neymar are training well and they will be important for the team.”

“Atlético play very differently than we do, but they do a great job; physically they are very strong, they don’t give you any space and it’s hard to create chances against them.”

“We aren’t happy with the draw because we are Barça and we always want to win the three points, but seeing how the match played out, perhaps a draw is a fair result.”

“We put in a great effort, we only lacked a goal.”

“It’s difficult to play against Atlético Madrid, they make it complicated to find space and their approach to the match was pretty defensive.”

“It was a very intense match, we tried to take the three points, but we didn’t create a lot of chances.”

“It’s a difficult stadium to play in and I believe we got a good result because they are a great team.”

“We didn’t play poorly, we had the ball, they didn’t create a lot of chances but we didn’t let them hit us on the counter.”

“It’s difficult to create chances when you go up against a team like Atlético, especially when they are on form.”

“Barça always have to go for the win, but seeing how the match played out I think we should be pleased with the point.”

“Madrid will fight for the title until the end, there’s a lot left; the season is long.”

“A lot is asked of the centre defenders, but when things work out right it’s because everyone is focused – it’s teamwork.”

“We’re pleased because we went after the match from the first minute, we knew that we couldn’t fail.”

“We had chances to score, but we didn’t manage to convert them.”

“The Vicente Calderón is a very difficult stadium to play in, the fans really get into the match and that helps Atlético, that’s why this is an important point.”

“The manager is giving me opportunities and I feel good.”