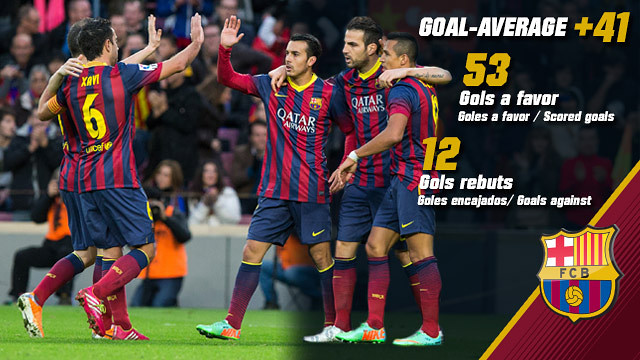 No team from either the Spanish Primera, Serie A, Bundesliga, Premier, or Ligue 1 have a better goal difference than Barça (+41)

The figures in detail

The stats don’t lie. FC Barcelona has the best goal average of the top 5 European leagues. No team from either the Spanish Primera, Serie A, Bundesliga, Premier, or Ligue 1 have a better goal difference than Barça (+41), with 53 goals scored and only 12 let in by Martino’s Barça in the first phase of La Liga.

The European teams who come closest to these figures are Manchester City and Atlético Madrid (goal average of +36), and Juventus and Bayern Munich (+34). The German team, however, should be in second position, as they have only played 16 league games, 3 less than Barça.

Barça are also in the top positions in terms of attack and defence. In terms of goals scored  Barça, with an average of 2.79 goals per game, are second, behind Manchester City, with 2.81 (59 goals in 21 games). Real Madrid have the same scoring average as Barça and Bayern (2.49), Atlético Madrid (2.47), and Liverpool (2.47) are the other European teams at the head of the scoring rankings.

In terms of goals conceeded, Barça are in 5th position, with an average of 0.63 goals per game. Bayern Munich and Lille top these stats with 0.5, followed by Roma (0.53) and Atlético Madrid (0.58). Teams like City, Real Madrid, or Liverpool, who are up with the top goalscorers, have poorer defensive figures.

Barça is also up there in terms of points per game ranking, tied with Atletico Madrid on 50 points, an average of 2.63 points per game. In Europe only 2 teams can beat that, Bayern Munich (2.75 points per game) and Juventus (2.74).