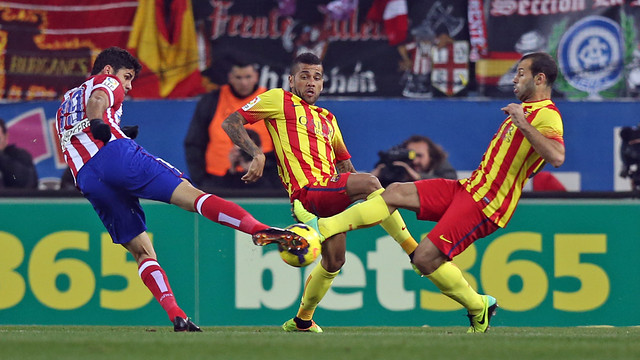 A gripping game between the two league leaders ended without score

The clash between the two league leaders at the Vicente Calderón saw both sides throw everything they had at each other, yet extraordinarily, considering the amount of goalmouth action, it ended with the same score as it began. Barça played serious, intense football throughout, trying to stay faithful to their possession and passing game, with Atlético Madrid concentrating on a more direct approach, with much reliance on counter attacks and dead ball situations. But neither side managed the ultimate breakthrough and Barça can celebrate the honorary title of being ‘winter champions’.

Messi and Neymar left out

Atlético started strong, usually their physical superiority to bully Barça off the ball, and the game was only four minutes old when Arda Turan had already come close to scoring. Meanwhile, the Catalans were struggling to control the situation and play the game at the pace they prefer. They were tight at the back and solid in midfield but were not finding the right touch in final third.

It was some achievement for Barça to survive that first fifteen minutes intact, and as the game grew older, so did their confidence, with Atlético forced further and further back into their own half. The Calderón started worrying, but all the same, it took 25 minutes for Barça to create their first clear-cut opportunity, which fell to Pedro.

Atlético took every chance they had to get the ball up the park quickly, and also made the most of their greater height to dominate in the air – with Diego Costa coming close to nodding home a corner on the half hour.

Moments later, Barça responded in identical fashion, with Pedro almost heading home, followed by a Piqué effort that Courtois did well to save. Despite the opposition’s aggression, and with Iniesta particularly commanding the edge of the penalty area, Barça were looking more and more comfortable with the situation.

The 0-0 scoreline at half time was by no means bad news for Martino, who knew that he still had a couple of aces up his sleeve. One of those, Leo Messi, came straight on after the break as a replacement for Iniesta, who had hurt his knee.

The best player in the world changed the game, even though the first chances of the half were Atlético’s. They had changed their strategy, and were now coming out at Barça rather than sitting back and waiting for the visitors to bring the ball to them. And it seemed to be working, especially with the now Iniesta-less Barça no longer quite so in control of the pace.

Martino added Neymar to the mix after 66 minutes in an attempt to hurl all the artillery he had in Atlético’s direction. It was at this stage that the game opened up completely, with chances at both ends and Diego Costa causing the Barça defence all kinds of trouble.

Battling to the end

Atlético had grown in confidence as the game went into the last quarter of an hour. But in their excitement, they were leaving gaping spaces at the back, and almost paid the price when Messi was only denied by a tremendous save from Courtois in the 80th minute. The final Barça substitution, Sergi Roberto for Pedro, was a clear attempt to strengthen the midfield, and a switch from three to two strikers in Messi and Neymar.

There was tension right through to the final whistle. The three minutes of stoppage time were spent almost entirely in the Atlético half, and a couple of goalmouth scrambles were frantically defended by the red-and-whites. All in all, a draw was a fair result, and it leaves these two colossal teams tied on points at the halfway stage of the season, although Barça take what is known locally as the ‘winter championship’ by virtue of their slightly better goal difference.