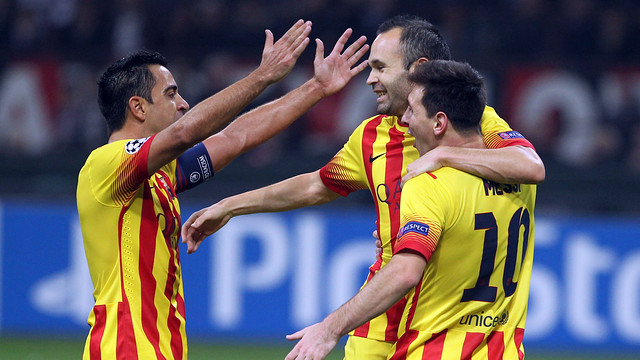 Sergio Busquets, Xavi Hernández and Andrés Iniesta have been shortlisted for the three midfield positions in the FIFA FIFPro World XI. This Friday 6, the names of the 15 candidates were revealed, following voting by their colleagues all around the world. The other players in the running are Xabi Alonso, Isco & Bale (Real Madrid), Özil (Arsenal), Arturo Vidal & Pirlo (Juventus), Schweinsteiger, Ribéry & Robben (Bayern), Reus (Borussia Dortmund), Toure (Man City) and Gerrard (Liverpool).

The three players selected for the final FIFA FIFPro World XI will be announced at the FIFA Ballon d’Or Gala in Zurich next January.

Xavi Hernández and Andrés Iniesta are no strangers to the FIFA FIFPro World XI. The former has been included in the last five editions, and Iniesta in the last four. Sergio Busquets, however, is looking to be included for the very first time.

FC Barcelona now has seven candidates for the team. In addition to the trio announced today, Víctor Valdés is one of five candidate goalkeepers, and Alba, Alves and Piqué are on the shortlist of 20 defenders. The 15 nominated strikers will be named on Monday December 9.