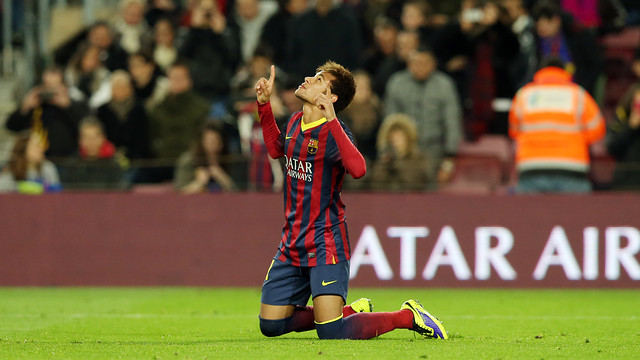 They say that the best things are those you have to fight to earn. And on Saturday, FC Barcelona certainly had their work cut out to get the better of a defiant Villarreal at the Camp Nou. A Neymar penalty set things up nicely, but Musacchio’s early second half goal meant it was all back to square one for Barça. But some terrific football eventually paid off with Neymar grabbing his second goal of the evening to ensure three vital points.

The win leaves FC Barcelona on 43 points and puts some breathing space between them and Real Madrid, who could only draw 2-2 in Pamplona. And it all puts pressure on Atlético Madrid, who will need to beat Valencia on Sunday night to stay joint top of the table.

Barça made their intentions felt from the outset. Their domination of the possession and rapid attacking moves prevented Villarreal from getting into the game, but there was still a spark or two missing in the FCB attack, and clear opportunities were slow in coming. Only Song, who turned a corner onto the post, did anything to really trouble the well organised visiting defence in the first twenty minutes.

An Alba cross changed the match. The ball clearly struck Mario on the hand and the referee has no choice but to point at the spot. Neymar stepped up for his first penalty in a Barcelona shirt, and cannily tricked Asenjo to find the net. Villarreal now had no option but to up the ante, but they couldn’t prise control of the game from the home side, and the clearest chance before half-time fell to Alexis, whose strike was well saved by Asenjo.

Villarreal hadn’t really put together a single attacking move of any consequence in the whole first half, yet immediately after the restart they pulled level. Musacchio outjumped the whole Barça defence to meet his team’s first corner of the game, and nodded home the equaliser. But despite the setback, nothing changed, and for the rest of the half there was only one team able to show any ambition, and that team was FC Barcelona.

It was only really thanks to Asenjo that Villarreal were still in the game, but the Yellow Submarine was finally sunk in the 67th minute when Cesc broke through their defensive lines to send the perfect pass to Alexis, and the Chilean generously set things up on a plate for Neymar, who made no mistake. It was precisely what Barça deserved for their persistence, and Iniesta came frustratingly close to making it three, but Asenjo once again came to the visitors’ rescue.

In the end, FC Barcelona squeezed it by the odd goal in three, but the result was no reflection of their absolute dominance over the ninety minutes. Following the last league game of the year at the Camp Nou, they now lead La Liga by three clear points, pending the outcome of Atlético’s game on Sunday night.