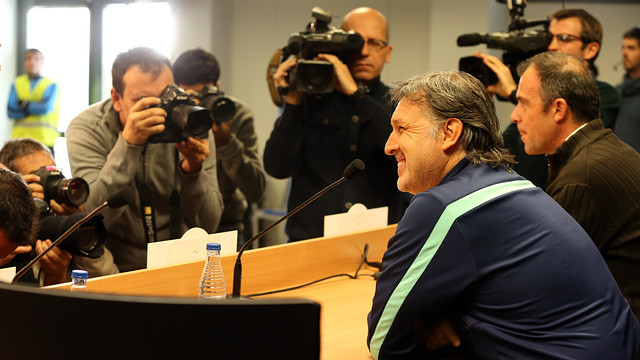 The boss reckons that the team need to use Wednesday’s game to put in a better performance than of late, take first place in the group and remove pressure”

“We have to be accurate and fast in our build up and in moving the ball around”.

The team’s barbecue on Monday made the headlines and Martino joked: what an omportant Club we are – we have a barbecue and it makes the papers in India!. Seriously, it was an idea from the players and it was a good way to unwind for a couple of hours together”.

[[DES_1]] In this lunchtime’s press conference ahead of the Celtic game, coach Gerardo ‘Tata’ Martino stressed the importance of the clash: “we know teh consequences for Barça of every match – this is an important game in all aspects – we have finish top, we have to win and put in a good porformance. For us, every game is tough and each one has consequences”.

A point will see Barça fiinish top of the group and against a Celtic side who will undoubtedly come to defend, Martino is clear what is needed: “we have to be accurate and fast in our build up and in moving the ball around. We’ll be playing in a 30 yard strip of pitch and we need to keep up the pressing too to stop Celtic hitting us on the break”. Martino also revealed that with Messi and Cesc both missing: “the most logical thing is that Neymar will start as the centre forward”.

Backward step in Amsterdam, but lesson learnt in Cartagena

In more general terms, Martino explained: “there have been games when I thought we were close to the level we want, but in others we were off the mark. The first half against Ajax was a step backwards for us, but the more we play together and regularly, the closer we will get to our best”.[[CITA_2]]
The defeats in Amsterdam and Bilbao brought about a reaction in the Cup and Martino explained: ” we talked together and we tried to sort out the areas where we have to improve. We played in Cartegena aware of where we had come from and what the last week had been like and I think we acted on that. One of the things I most valued was our self repect in that game”.

There have been games when I thought we were close to the level we want, but in others we were off the mark.