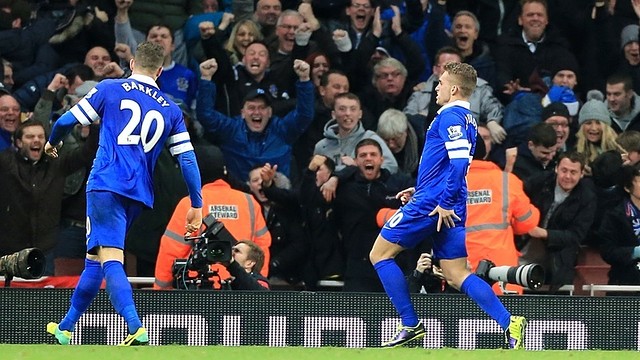 The FC Barcelona player, who’s on loan with Everton this season, is making an impact in the Premier League

The latest La Masia talent to make waves on the international football stage is Gerard Deulofeu. The Catalan, who joined FC Barcelona’s youth academy at the age of nine, is currently honing his talents with Everton on a one-year loan. This past weekend, the forward stunned Emirates Stadium when he riffled the ball past Arsenal keeper Wojciech Szczesny on 83 minutes, four minutes after Mesut Ozil had scored the go-ahead goal for the home team.

Deulofeu’s form in the Premiership comes as no surprise to Everton manager Roberto Martínez. Prior to this weekend’s match, the Spaniard told The Guardian that Deulofeu “has already exceeded my expectations. I thought he would need until at least January to be ready for the English league, so he is well ahead of schedule.”

Martínez added: “I was very pleased Barcelona trusted us with his development. I have been following his career in the Barça B side since he made his debut against Real Madrid at the age of 16. That caught my eye and from that point on it was a matter of pestering Barcelona and being clear about what we could offer.”

After this weekend’s performance against Arsenal, the Catalan, who goes by ‘Geri’ because his “last name is a bit too complicated”, sat down RAC1 to talk about this current chapter in his career.

“I’m very happy to play in the Premier League,” said Deulofeu. “The fans here really love football. It’s incredible how they cheer you on. They are very respectful and they always support you, even fans from opposing teams.”

In addition to enjoying English football culture, the Catalan noted that he’s pleased with how things have developed with his new team: “I knew that [coming to Everton] would be difficult, I’m young and I still have a lot to learn. Roberto [Martínez] is doing a marvelous job. He gives me confidence and I’m very happy. Hopefully, little by little, I’ll get a bit more playing time.”

Lastly, the forward was asked about his expectations for next season, when his loan with Everton expires: “I’m here for a season, and after that I’m a Barça player. I want to enjoy this experience. I’m only focused on this season. Whatever comes in the future, will come in its own time.”