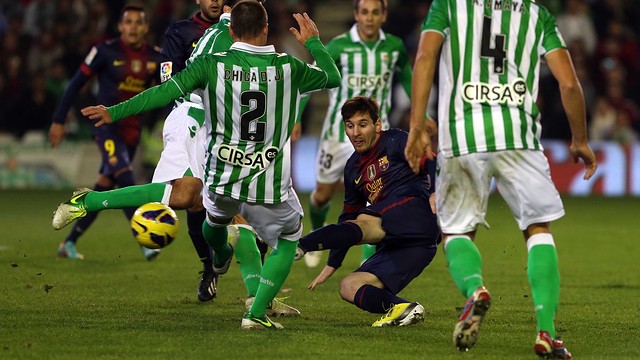 FC Barcelona are in action on Sunday (21.00, C+1 and C+1 HD) against Betis at a ground where Valdés, Iniesta and Xavi have featured in all eight of the visits overt the last ten years

Out of 48 Liga matches in green-and-white territory, FC Barcelona have won 19, drawn 13 and lost 16.

And the last eight visits by Barça to the Benito Villamarín have produced two wins apiece and four draws.

Víctor Valdés, Iniesta and Xavi have featured in all of those games.

Every time Carles Puyol has played away to Betis, he has been one of the starting eleven.

Leo Messi and Sergio Busquets are the only current Barcelona players that have ever scored at the Benito Villamarín.

The Argentinian got both FCB’s goals there last season in a 2-1 win.

Those were the two goals that took his tally up to 86 for 2012, breaking the all-time record for goals in a calendar year until then held by Müller.

Betis are in their third consecutive year in the top flight. Other than the aforesaid 2-1 win, they also drew 2-2 in this fixture two years ago.

Joan Verdú and Xavi Torres are both players with a Barça past that are now playing for the Andalusians.

Both made appearances for the Barça first team but never played against Betis.

Pepe Mel has faced FCB as manager eight times, including the period when he was on the bench at Tenerife.

His teams have lost six of those games, and in total have only scored 10 goals compared to Barça’s 26.

Betis have been in the relegation zone for the last three matches, and haven’t won any of their last five games.