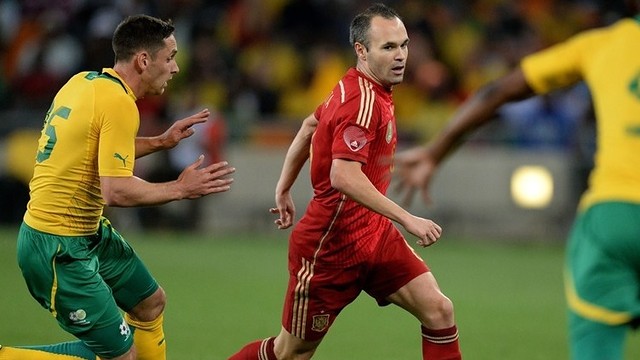 Sergio Busquets, Andrés Iniesta and Pedro Rodríguez were in the starting line-up for Spain

The Spanish national team lost this Tuesday at Soccer City to South Africa (1-0) in a match marked by a knock that Víctor Valdés picked up in the second half. The Barça keeper was subbed off on 81 minutes for Pepe Reina.

Spain’s match in South Africa was a sentimental one. Andrés Iniesta, Valdés, Pedro and Sergio Busquets returned to the stadium that saw them claim the World Cup in 2010. The Africans, who played a very serious match, took the lead on 56 minutes thanks to a strike from Parker.

In the second half, Del Bosque brought in Cazorla, Negredo, Mata and Navas, and Valdés was subbed off, on 81 minutes, for Pepe Reina after the Barça keeper picked up a knock to his calf.