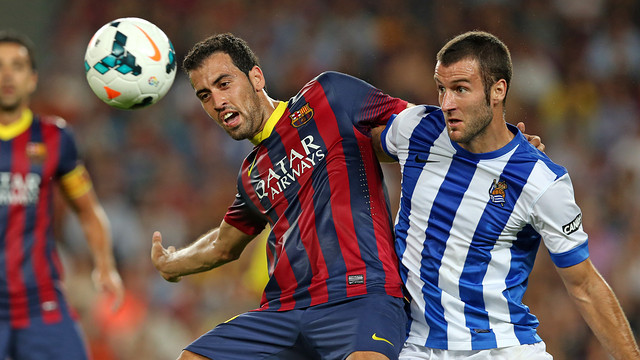 Sergio Busquets, who is currently in South Africa with the Spanish national team, phoned in to Onda Cero on Monday evening to talk about, among other things, Barça’s level of play, Messi’s injury, and his personal favourite to win the the Ballon d’Or.

‘Busi,’ a man who admittedly shies away from the limelight, was very clear when asked about his Club’s current level of football: “We aren’t at the level we were at during the Guardiola era, I don’t think that form is repeatable. But the criticisms Barça get are disproportionate.”

Inevitably, the midfielder was pointedly asked about the injury his Argentinian team-mate, Leo Messi, picked up against Real Betis. Busquets said, “Messi is intelligent, he knows what he needs. This is not a short-term injury.” He added: “He’s going to recover as well as possible, and he will do so calmly. He knows what he needs better than anyone else, and he knows that rushing things can lead to complications. When he comes back he’ll be at 100%.”

“For me the number one is Messi,” said the Catalan when he was asked who his top pick was for FIFA and France Football’s most august individual prize. “He doesn’t need to win the treble or finish the season as the leading goalscorer in La Liga. The criteria for awarding the Ballon d’Or are not very clear to me, but it’s obvious an attacking player is going to win it. All the nominees are great players.”