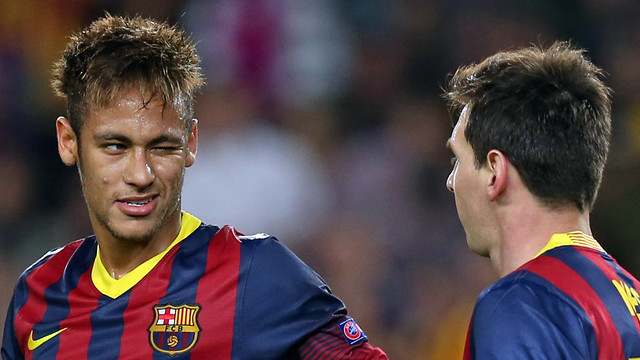 Neymar Jr is sorry that Leo Messi is side-lined through injury until early 2014. The Brazilian was speaking in an interview with ‘Mundo Leo’ on the Argentine DXTV network, and sent a message of support to his Barça team-mate. “The team is sad because Leo is one of the basic parts of this team. We know that he can change a game in our favour at any moment”, he said. “I hope he recovers and starts playing again as soon as possible”.[[CITA_1]]

“I have always admired FC Barcelona, ever since the days of Ronaldinho, and even more so now that I am playing alongside Messi, Xavi and Iniesta”, he told the cameras. “I had always dreamed of playing with such stars as them, to train with them, to share a dressing room with them … Being there is like being in another world.”

Neymar also spoke about working under manager Tata Martino. “He’s a great coach and a wonderful person” he said. “He asks of me the same that he asks of every other player. How to mark and how to move around. He gives us total freedom.”

I have always admired FC Barcelona, ever since the days of Ronaldinho