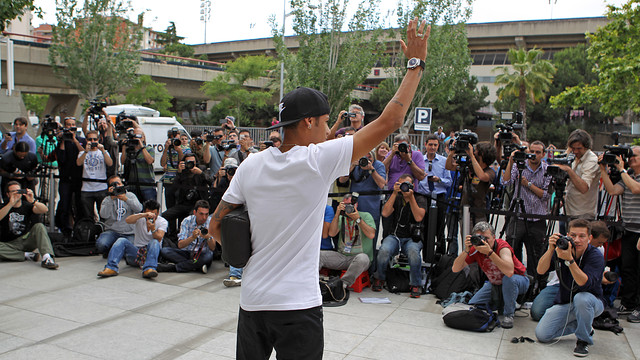 A study by Stochos Sports & Entertainment has revealed something we really knew already. That Neymar Jr is the most popular footballer in Brazil. But what is most surprising is how popular FC Barcelona are in his country.

The study was conducted from August 25 to September 30, 2013 and covered all social classes (A to D) and people of both genders aged 16 to 65 in every state of the country. And Neymar came out tops.

The Barça striker got a huge 32.1% of the votes. And he was followed in the voting by his club colleague Leo Messi, winner of the last four editions of the Ballon d’Or and who got 9.1% of the votes. Ronaldinho, who also has a Barça past, came third with 8.1%.

Big with the ladies

Neymar Jr got an even bigger share, 35.7%, when only counting the votes by the female population. The man whose legions of lady supporters are known as the ‘Neymarzetes’ was far and away the leader in this respect, with Ronaldinho coming second with 7.9%.

But it is not only Brazilian women who are fervent admirers of Neymat. 30.4%. of men also voted for him, with Leo Messi second with 11.7%.