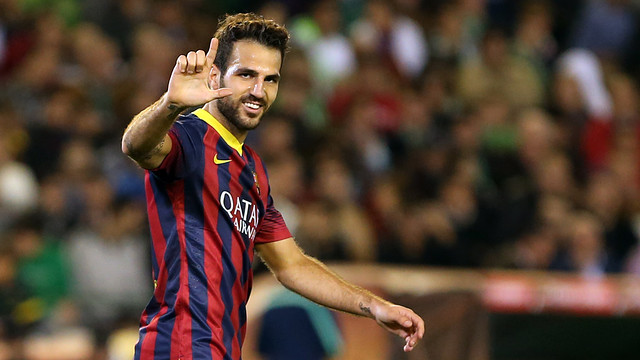 The FC Barcelona midfielder is very pleased with his performance this evening, even though he needed to be subbed off before the end of the game

“Physically I’m feeling better, now I have to get some playing time and take advantage of the training sessions,” says Puyol

The midfielder and the center back passed an anti doping test after the match against Betis.

Barça will return to training on Wednesday, November 13, without its internationals. The session will start at 11.00 at the Ciutat Esportiva.

He gave an assist and he scored two goals in the match against Betis. After the game, Cesc told the press that he’s pleased with his current good form: “I’m on good form, I always try to vindicate myself and make a difference.”

Fàbregas admitted that “the team was a bit slow at the start, after the first goal we got better and in the second half we were very superior.” The midfielder then thanked his manager for his words of praise after the match even though he wasn’t named to the starting team in the mid-week showdown with Milan: “I know what his ideal starting team is, the rest of us need to push hard.”

Unfortunately, Cesc was unable to finish the match and he was subbed off due to issues with his knee. Cesc said that “I wasn’t comfortable, and seeing that the match was beyond Betis’ reach I preferred to to be subbed out.” When asked about Leo Messi’s injury, the midfielder said “he should take good care of himself and not rush his recovery.”

“The goal came from a good play that was built up from the back. It’s helpful because it builds my confidence. I’m calm, I try to take advantage of my opportunities.”

“Betis are a team that always cause us difficulties, the fans are right on top of you… it’s important to keep on winning.”

“We took advantage of the spaces that they left behind their defence, we’re pleased with the victory.”

“We did our job and we’re lucky that other results went in our favour.”

“We secured three important points in a very difficult stadium where the pitch was in bad condition.”

“Betis were intense in the first half hour, but our first goal helped us control the rest of the game.”

“Physically I’m feeling better, now I have to get some playing time and take advantage of the training sessions.”

“Messi needs to be clam and recover well.”