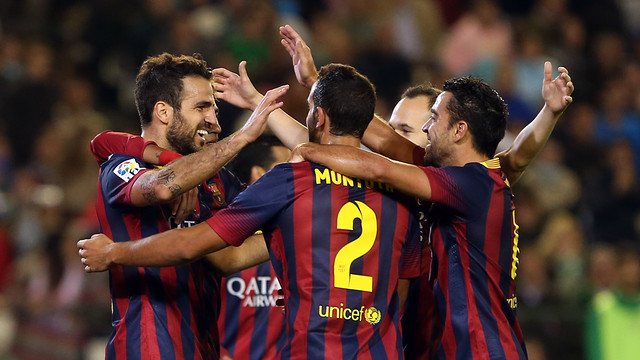 Cesc and Pedro, who both scored in Seville on Sunday night, have started all seven of Barça’s league games on the road so far this season and bagged four goals each.

Below we take a look at some of the facts and figures arising from the 1-4 win over Betis at the Benito Villamarín on Sunday night.

– Neymar has now scored five goals so far this season. The strike against Betis was his first on the road in the league, though he also scored at the Calderon in the Spanish Super Cup.

– Cesc and Pedro have started all seven away games in the league so far this season and have each scored four goals.

– The two goals against Betis was the fourth time he has scored a brace as a Barça player, having also got two against Levante (5-0) and Seville (2-3) in the league and against Osasuna (4-0) in the Cup. His only hat trick came against Mallorca (5-0).

– Cesc  also has 8 assists  – the most in the Spanish League, alongside Atletico Madrid’s Koke.

– Víctor Valdés picked up his first yellow card of the season.  Dani Alves’ booking was his third of the league campaign..

– Montoya started his fourth game of the season, the team have won three and drawn one of those matches.

– Puyol and Bartra played at the heart of the defence for the third time this season.  In Pamplona and Vigo they helped keep a clean sheet.

– In the six games Bartra has started, Barça have conceded just two goals.

– Sergi Roberto also played in Seville and his 13 minutes were his first since the game against Real Sociedad (4-1).

– Barça have led the Spanish League for 51 consecutive rounds – just two short of the all time record held by Real Madrid.