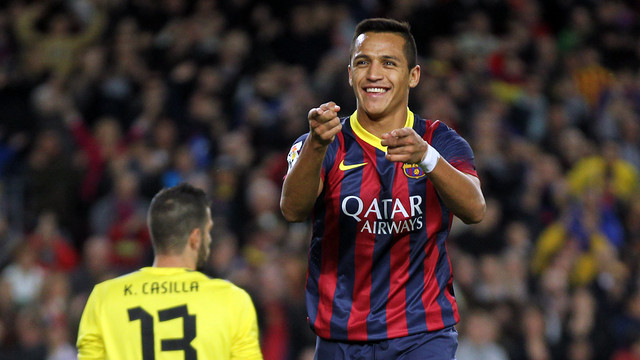 FC Barcelona have been playing a lot more on the counter attack this season, and that, he says, is better suited to his game

In an interview with El 9 newspaper, Alexis Sánchez has spoken frankly about what many people are saying is turning out to be his best season since joining FC Barcelona.

A striker’s performances will inevitably be judged on the number of goals he scores, and in that respect, Alexis feels that his personal style of play is best adapted to counter attacking, because, as he says “ I’m quick and that way I can get through on goal better.” His role this year is more like the one that impressed so much at Udinese, “because the ball gets to me quicker. I can deal with one-on-ones, but not one-on-threes. If a team packs the defence, it’s hard for me. I need the ball to get to me quicker.”

A good example of the kind of game Alexis struggles in was the one against Espanyol. “I was being marked by their forward” he laughs. “But thank God I managed to score and win a very important game.”

Gerardo Martino always said that he was a fervent admirer of how Alexis Sánchez played for Chile under Bielsa, “because I was running up and down, like I do now, winning balls and racing up the pitch to score goals.” And Sánchez reckons the best goal he has scored since being at Barça was in the clásico against Real Madrid. “After that I’d go for the one at Valladolid and in third, the one at Rayo Vallecano under Guardiola when I swerved the ball in at the far post. I got two goals that day.”

Although the team did incredibly well under Guardiola and Vilanova, the Chilean appreciates the way Gerardo Martino has changed a few things “because opponents have learned how to play against us. We need new strategies, and playing on the counter attack is good for us. We did that against Milan and Messi got the equaliser, we did that against Valencia and Leo scored twice. With players like Messi, Neymar, Tello, Pedro and me, who are all quick, we can play that way.”

He goes on to explain how tough it can sometimes be to play at a club like Barça. “It is very hard to win over the Camp Nou crowd” he says. “I still don’t think I’ve managed it yet, but I’m trying with every game. It’s been like starting all over from scratch”

With Atlético Madrid doing so well Alexis agrees that La Liga is not the usual two-horse race this year, and “the first team to start making mistakes will fall away … Real Madrid have regained confidence since we beat them at the Camp Nou. They got seven goals against Sevilla and are looking strong in the Champions League.”

In that competition, there is no doubt that Barça are keen to make amends for their resounding defeat at the hands of Bayern Munich last year, but “it’s going to be really difficult this season. A lot of teams are winning their games easily, by three or four goals to nil.”

But one of the factors that has certainly boosted Barça’s possibilities is the arrival of Neymar. The Brazilian still has a lot to prove, and Alexis compares that to his own situation, but laughed that in Neymar’s case, “it’s his first season and he’s already getting goals!”

It is perhaps because of this that Alexis has been switched back to the wing in recent matches, although the team still doesn’t seem to have a natural centre forward. “But they’ve been saying that for five years and we’ve won everything, the league, the Champions League, the Clubs World Cup. A team needs every option it can get, but we have done fine without an out and out centre forward.”